Nigeria set for collaboration with IMO 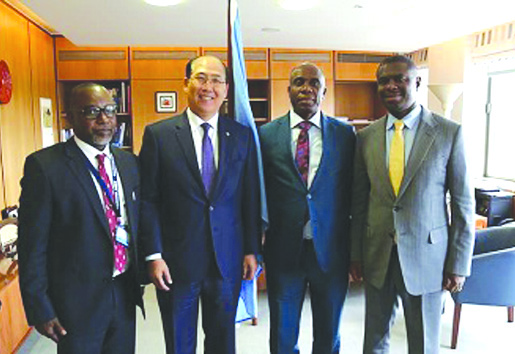 The Minister of Transportation, Chibuike Amaechi, has expressed Nigeria’s commitment to greater collaboration with the International Maritime Organisation (IMO) to develop the maritime industry. Amaechi, who paid a courtesy visit to the Secretary-General of IMO, Kitack Lim, recently in London commended the organisation for the technical assistance rendered to Nigeria.

He called for more cooperation in combating piracy and improving maritime education, saying “Nigeria has already put in place action plans and initiatives through the Nigerian Maritime Administration and Safety Agency (NIMASA).”

Amaechi said the action plans were for the implementation of the Code of Conduct entered into by the Heads of States and Governments of ECOWAS, the Economic Community of Central African States (ECCAS) and the Gulf of Guinea Commission on the fight against piracy, sea robbery and other maritime crimes.

To make Nigerian ports safer for international trade, the minister said that the Security Assessment Checklist of the International Ship and Ports Facility Security (ISPS) Code were continually receiving adequate attention by both NIMASA and the Nigerian Ports Authority (NPA). He also assured Lim that the findings of the recently-concluded IMO Member States Audit Scheme (IMSAS) of Nigeria “is being studied’’.

According to Amaechi, “this is with a view to preparing and implementing Corrective Action Plans (CAPs) within the stipulated time frame.” He called for greater technical cooperation with the IMO aimed at reviewing programmes and curriculum of the Maritime Academy of Nigeria (MAN) in Oron, Akwa Ibom,

The minister said this is in compliance with the support to secure sea time training for graduates of the maritime Academy. Amaechi also requested for a technical advice in converting the academy to a degree-awarding institution and greater involvement of the IMO in building capacities of the Academy’s instructors.

The IMO secretary-general commended Nigeria for its commitment toward meeting the obligations of the IMO and other international organisations. He assured the minister of the cooperation of the IMO in the areas of continuous training on Maritime Security, Search and Rescue (SAR), Port State Control (PSC) and capacity building for instructors of MAN.

He said that sea time training had become a global concern, adding that the IMO would reach out to shipping companies toward engaging the Academy’s cadets on board vessels. Amaechi was accompanied to the IMO Secretary General’s office by the Director-General of NIMASA, Dakuku Peterside, and Nigeria’s Alternate Permanent Representative to the IMO, Dr. Diko Bala.