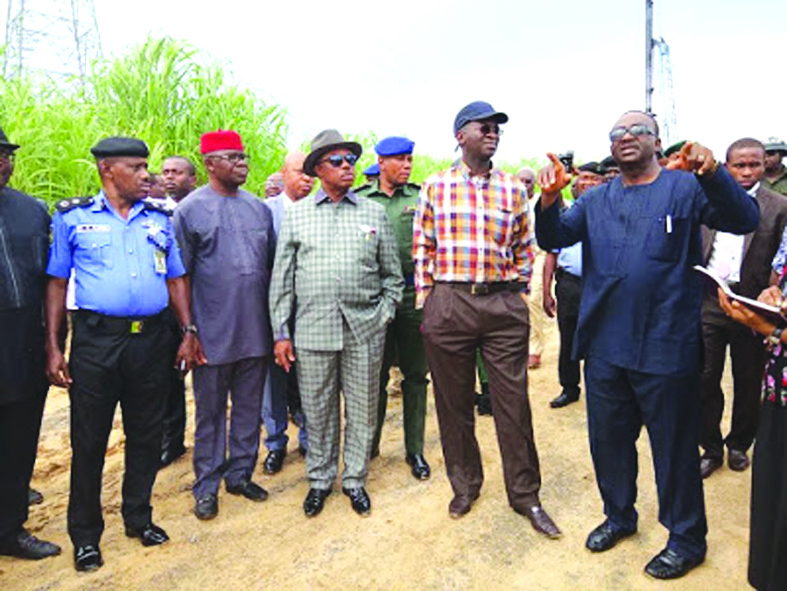 The Minister of Power, Works and Housing, Mr Babatunde Fashola rekindles the hope that the Muhammadu Buhari administration would complete the Second Niger Bridge

The people of the South-East geo-political zone who have been wondering whether the Second Niger Bridge has once again been abandoned by the present administration just like successive governments, heaved a sigh of relief on June 20, this year. The relief came as the Minister of Power, Works and Housing, Mr Babatunde Fashola promised that the Federal Government would complete the project.

Fashola gave the assurance during his one-day official visit to Onitsha, Anambra State, where he conducted on-the-spot assessment of work on the bridge. He was accompanied by Anambra State Governor, Mr Willie Obiano, traditional rulers and top government officials, among others.

Describing the project as a national asset, Fashola said the Muhammadu Buhari administration was committed to completing it, adding that when completed, the bridge would improve and accelerate the economic prosperity, transportation and exchange of goods and services across the country. “I am here in pursuant of the commitment of the Federal Government and that of President Buhari to complete the bridge. It will give relief to the First Niger Bridge and ensure that it is kept in a good state of repair and maintenance,” he said.

The minister also promised that government would compensate appropriate landowners and ensure that the Environmental Social Impact Assessment (EIA) is taken care of. He disclosed that the bridge was the Federal Government’s first move towards a Public Private Partnership with some investors. He said that the project is one of the largest infrastructural works being embarked upon by the Federal Government, even as he urged the host communities not to interrupt the project’s progress or engage in hostilities. According to Fashola, it is better to dialogue with the government while work continues on the project in the interest of the country than for the host communities to confront the government.

He commended the Obi of Onitsha, Igwe Alfred Achebe, for resolving issues of land ownership, court cases, compensation, and issues concerning environmental impact assessment which were part of the problems hindering the progress of work on the project.

Igwe Achebe urged Fashola to tackle the challenges and see to the completion of the project which is a major priority to all Nigerians as it is a unifying factor.

Governor Obiano expressed hope that the project would be completed in good time to boost commercial activities and living conditions of the people.

Former President Goodluck Jonathan flagged off the construction of the 1.6 kilometre-long Second Niger Bridge on March 10, 2014 at Krisoral ground, Atani, near Onitsha. He said that the Federal Government would execute the project under a Public Private Partnership (PPP) arrangement for a concession period of 25 years, precisely, through a ‘Design, Build, Finance, Operate and Transfer (DBFOT)’ model with Messrs Julius Berger-NSIA Consortium as the concessionaire. But it turned out to be part of Jonathan’s vote-catching gimmick as no substantial work was carried out on the project before he quit office on May 29, 2015 following his defeat in the presidential election.

Before then, there have been many failed efforts of previous regimes to kick-start the project. The idea of a Second Niger Bridge was first proposed under Shehu Shagari administration (1979-1983). It was, however, during the administration of Ibrahim Babangida the Nigerian Society of Engineers was commissioned to produce a master plan for the construction of the bridge. However, the Babangida regime failed to follow-up on the project, leaving behind the master-plan in the wake of the political cataclysm that forced him to ‘step aside’ in 1993.

Though the General Sani Abacha administration did not consider the project worthwhile, the then Minister of Works, Lateef Jakande reportedly blamed it on the inability of Nigerian engineers to produce the design. Thereafter, it became a political trump card in the wake of return to civil rule with ex-President Olusegun Obasanjo making the bridge his top promise to the people of South-East during the 1998/99 presidential campaign. Obasanjo did not remember the project until the twilight of his eight-year administration.

Performing a face-saving foundation laying ceremony on May 24, 2007, five days to his official hand-over to the late President Umar Yar’Adua, Obasanjo had blamed the delay in the execution of the project under his tenure on the inability of the National Assembly to pass a law that would enable Federal Government participate in the public-private partnership.

The expectation of the people of the South-East that the Yar’Adua administration would expedite action on the project was dashed when the then Minister of Works, Housing and Urban Development, Dr. Hassan Lawal claimed that there was no design for the Second Niger Bridge project.

The ding-dong affair continued until Yar’Adua died and was succeeded by Jonathan who also used it as a vote-catching gimmick. With the rekindling of hope on the Second Niger Bridge by Fashola, the people of the South-East geo-political zone are anxiously waiting for speedy execution of the project as promised by the present administration.n