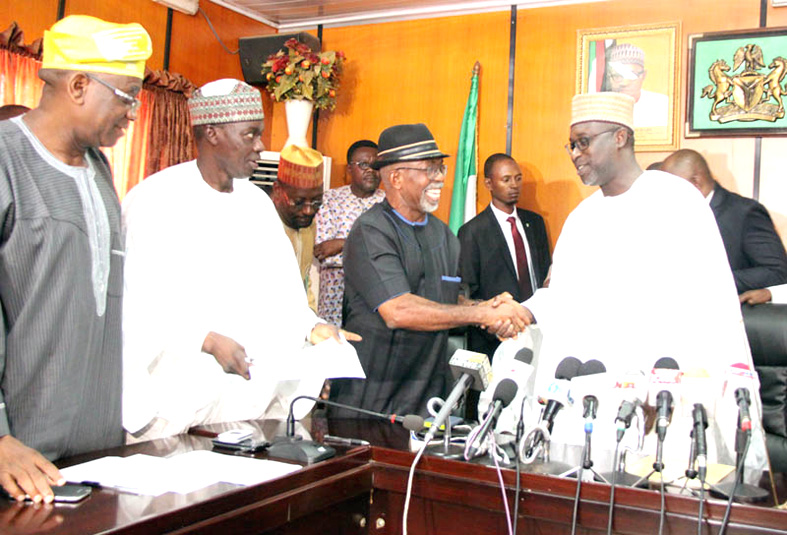 The Minister of Water Resources, Engr. Suleiman Adamu who signed the contract agreement said that his vision for the sector is to reposition and strengthen the RBDAs to become major economic nerve-centres in line with the economic diversification policy of the present administration. “In line with this policy thrust, a retreat was organized for all stakeholders and practitioners in the sector which culminated in the setting up of a Committee to produce a Blueprint and Action Plan for the repositioning of the RBDAs,” he explained. He added that as part of the Action Plan, the Committee members visited the Songhai Farms in Cotonou, Benin Republic early this year to learn from the model.

According to the minister, the contract agreement revolves around the Graduate Employment Scheme/Farm Settlement Schemes. The schemes would be located in each of the 109 Senatorial Districts and will enhance the ability of the RBDAs to package their water services with the provision of complementary basic rural infrastructure.

He explained that these centres would be along the Songhai Farm settlement style, exploring the Public-Private Partnership (PPP) model in ownership and financing while the RBDAs will be the primary delivery vehicles. “The main objective of this scheme is massive job creation for the youth with a year-round agricultural production and other value chain activities such as processing, storage, markets, e-commerce, amongst others. Each of these farm centres will have minimum of 50 graduates amounting to about 1,200 graduate employees nationwide,” Engr. Suleiman said.

He urged the Managing Directors of all the RBDAs to take charge and come up with a blueprint and a step-by-step approach for the implementation of this laudable programme which will increase tonnage of food production, generate employment and manage the available water resources of the country.

Adamu, however, noted that the signing of the agreement has not in any way put a stop to government’s efforts towards the partial commercialization of the RBDAs. He recalled that the Steering Committee and the Technical Sub-Committee were both inaugurated on May 26, this year, with the mandate to draw up a partial commercialization framework of the RBDAs,    identify all key issues such as funding, regulatory policy, technical and other economic factors that hinder the partial commercialization of the RBDAs. He added that the committees were mandated to consider any other matter necessary for the drafting and implementation of the new legal and regulatory framework for the RBDAs and provide advice on any other issues necessary for the successful implementation of the programme. “I am happy that both the Director-Generals of BPE and ICRC are present at this event today to witness this historic event,” Adamu said.

He expressed gratitude to Prof. Godfrey Nzamujo, Director and Head of Songhai Farms for agreeing to partner with RBDAs in providing consultancy services for the laudable project. “Be assured, Prof. that I will give you all the necessary support needed to actualize the vision of this administration towards self-sufficiency in food production, food security and employment generation for our people,” the minister said.

Prof. Nzamujo commended the Federal Government for the partnership, saying that it would actualize the vision of the present administration towards self-sufficiency in food production, food security and employment generation.

He explained that about 70 percent of today’s diseases suffered by Nigerians is as a result of poor nutrition occasioned by poisonous foods intoxicated by chemicals. He said that the project would facilitate production of quality foods and gainful employment for Nigerians through the revitalization of the RBDAs.