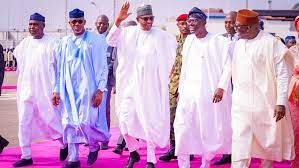 An estimated N65 million was, yesterday, lost as cargoes got trapped at the Lagos port following the Nigerian Ports Authority’s (NPA) total closure of the facility and restriction of access to port users over President Muhammadu Buhari’s visit.

The NPA began a strict access control into the PTML area of the Tin Can Island Port, since last weekend, due to the two-day working visit of the President to the MRS Petroleum Tank Farm.

The President is expected to visit the MRS Tank Farm close to PTML Terminal today (Tuesday) to commission a lubricant factory. NPA port security officials and men of the Nigeria Police Force (NPF) were seen dispersing port users with security dogs, which created pandemonium at the Tin Can Island port.

Scores of freight forwarders, who had earlier gained access into the port, also confirmed that they were chased away with dogs by the police. They lamented the huge losses the protocol surrounding the President’s visit had cost them and the nation, as one of the busiest ports in Africa.

Speaking journalists on the situation, the National Public Relations Officer of Association of Registered Freight Forwarders of Nigeria (AREFFN), Taiwo Fatomilola, lamented that huge losses are being incurred on the trapped cargoes at the port.

“They have paralysed the finance of the port for the past two days. The vehicles and trucks that have been loaded, that were supposed to leave the port since Saturday cannot leave.

“The port has been shut since the weekend. In Tin Can alone, we are losing about N30 million to demurrage, while PTML is about N35 million. That is about N65 million lost per day, money that would have been used as revenue. Imagine the amount that would have been lost for the days the ports will be shutdown.

“There is nobody making use of Tin Can Island Port and Grimaldi today as we speak, nobody can access these ports, everybody is stopped at the gate. After showing our identification cards, they came around with police and dogs to chase people away, meanwhile, it won’t be until Tuesday (today) that the President will visit here,” he lamented.

Also reacting to the shutdown, the Public Relations Officer of the Association of Nigerian Licensed Customs Agents (ANLCA) at Tin Can Island, Onome Monije, said NPA and its operatives were frustrating the ease of doing business, noting that there is no relationship between MRS and port activity. She said no truck can come in or out of the port corridor of Tincan and PTML terminal.

The Taskforce Chairman of ANLCA at Tin Can Port, Rilwan Amuni, condemned the action, saying there was no prior notice or sensitisation for port users, as many freight forwarders are stranded inside the port and unable to take delivery of their already examined cargoes.

Meanwhile, wearing a flowing white agbada, like his host, Governor Babajide Sanwo-Olu, President Buhari, yesterday, at 4:25p.m. commissioned the $1.5 billion Lekki Deep Seaport that will generate over $361 billions to the nation’s economy.

The President arrived Lagos 92 minutes earlier, touching down at the Presidential wing of the Muritala Mohammed International Airport at 3:33p.m. into the waiting hands of Sanwo-Olu, his deputy, Dr Kadri Obafemi Hamzat, as well as governor of Ogun State, Dapo Abiodun; Ekiti State governor, Biodun Oyebanji, as well as former governors of Ekiti and Ogun, Kayode Fayemi and Ibikunle Amosun, respectively.

Also on hand to receive the President were members of the state executive council members, All Progressives Congress (APC) leaders and private sector players.

After inaugurating the Lekki Port, the President came into the hall to greet traditional rulers and others who had gathered as early as 10:00a.m. but waited patiently till President Buhari arrived to commission the project.

Speaking after Mr. President unveiled the Lekki Deep Sea Port, Sanwo-Olu described the project as the biggest infrastructure in the whole of West Africa, saying it will surely provide thousands of jobs in the country. He added that the Lekki Port is expected to handle four times the capacity of cargoes the Apapa and Tin Can ports currently do.

This was just as he stated that the multi-billion naira project is a collaboration between the Federal Government and Lagos State government, as well as the private stakeholders.

He expressed joy that the execution of the project, which took off under President Buhari’s administration, was completed during his tenure. Sanwo-Olu said vessels that will berth at the deep port would be four times the size of the vessels that berth in Tin Can and Apapa.

The Managing Director, NPA, Muhammed Bello-Koko, said the port will attract bigger vessels and more cargoes, as well as reduce the cost of doing business in this country, compared to other countries.

He said the port will be more efficient and be a model for other upcoming deep sea ports in Nigeria, adding that NPA has already gone ahead to purchase the necessary equipment that will ensure safe and secured berthing of vessels.

“While sitting here we already have interest from a certain neighbouring country that is already talking about moving their cargoes from Lekki to Kano then to the African country because they have seen the opportunity of smooth operations here and the efficiency,” he said.

He said the company sees the opportunity in Nigeria, and believes in its potential, which is why it has committed adequate financial investments and essential technology in the construction and operation of the port.

Qiaoliang said under the framework of the China Africa Forum and the Belt and Road Initiative, the company looks forward to establishing long-term strategic partnerships in the infrastructure sector with the Federal Government.

He said this will ultimately deepen the relations and cooperation between Nigeria and China, better serving the Nigerian people and its economy. Chairman of Tolaram Group, Mr. Mohan Vaswani, said the completion and commissioning of the world-class port is an important milestone that will increase the economic well-being of Nigeria and its people.

Vice President, Africa CMA-CGM, Ludovic Rozan, while speaking on the container vessel that berth at the port said, more vessels would call at the port in the coming week. He said CMA-CGM would operate and partner with other shipping lines to bring bigger vessels to the port.

The Executive Secretary/Chief Executive Officer of Nigerian Shippers’ Council (NSC), Emmanuel Jime, said the council would not only monitor, but also ensure efficiency and quality of service going to be delivered at the port.

The President, thereafter, left the Lekki Port to Imota in Ikorodu, where he commissioned the 2.5 million metric tonnes per hour Lagos Rice Mill.

The President arrived the venue around 5:30p.m. accompanied by Sanwo-Olu and Chairman/CEO of Nigerians in the Diaspora Commission (NiDCOM), Mrs Abike Dabiri-Erewa, among others.

After the official unveiling of the mill, he was taken round the premises in the company of the Senator representing Lagos East, Tokunbo Abiru, the commissioner of Agriculture, Olusanya and traditional rulers, where he was shown the modern equipment and other facilities of the plant.

Recall that the integrated rice milling project in the state, started on the success of the Rice for Job Programme, in 2008. The programme covered all aspects of the rice value chain. Paddy processing was done in cottage mills.

The programme birthed the first integrated mill in South West in Imota, which was in operation till 2016. The mill had a yearly output of 120,000 bags of 50kg rice.

In his speech, Sanwo-Olu said the Imota mill is the largest in the entire Sub-Saharan Africa and one of the largest in the world. He said: “The success of this project is due to the Agricultural Revolution drive of Mr. President, who when he started his administration said Nigerians should grow what they eat, and eat what they grow. We are happy that Lagos is a testament of that with the 2.8 million bags of 50kg rice production yearly, Lagos is ready to support the rice revolution and food revolution in Nigeria.

“It will create close to 250,000 direct and indirect jobs. We want to thank the local communities of Imota and Ikorodu, Mr. President is indeed elated that we have started another first in Nigeria and in Sub-Saharan Africa.”

The Lagos Rice Mill, Imota, is a 2 X 16MTPH facility standing on an area of 8.5Ha land with a yearly paddy requirement of over 240,000MT to produce 2.5 million bags of 50kg rice per year. The mill will generate about 250,000 direct and indirect jobs to Lagosians.