Mbaka Saga: Shame on You, Garba Shehu, Which Contract Did I Ask from Buhari — Fr Mbaka Replies Shehu 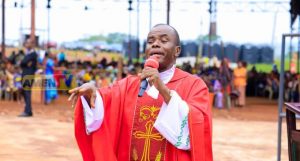 Catholic Priest and Spiritual Director of Adoration Ministry, Enugu, Fr Ejike Mbaka, has reacted to an allegation by the presidency that he once brought three contractors to President Muhammadu Buhari and was rebuffed.

Mbaka had on Wednesday said God is angry with Buhari over his inaction on the widespread killings across the nation. Speaking at the Adoration Ministry in Enugu, Mbaka said it is wrong for Buhari to maintain grave silence despite the incessant killings in the country.

He accused the government of being behind several killings across the country and tagging separatist groups as terrorists rather than focus on getting them good jobs.

The cleric also frowned on the activities of herders that destroy the farmland of people without any repercussion. He said Buhari had failed Nigeria woefully and that he should resign now. Mbaka also called for the President’s impeachment.

Reacting to the allegation by the Presidency on Sunday, Mbaka blasted Garba Shehu, saying he only recommended three people to the presidency for a project to end insecurity in the country.

Mbaka, in a veiled reference to Shehu’s allegation, said, “If I talk, you talk, because the government is paying you? Do you know how many people I am paying? I am an employer.

“Someone said he gave father Mbaka a contract; I started laughing. I am not here to defend anybody’s stupid allegation but God used that man (Garba Shehu) to tell the world that the Buhari government is not giving me money. Shehu, God bless you for telling everybody you didn’t give me a contract.

“The three men he (Garba Shehu) talked about..these were the three men that I recommended to the government; they wanted to tackle insecurity; they had the gadgets. That was during the first administration.

“They had a platform to end insecurity in one month. I handed them over to the government. I didn’t know them. They said they had all it takes to revive the oil apparatus and get the youths employed; the government rejected their offers.

“If they are worried I am blessing Nnamdi Kanu, is he not blessed, is he not my brother spiritually, is he not my son? What’s their problem? Let them be careful with their choice of words. If anyone tells the truth, he becomes a terrorist, shame on you…. I do my charity without assistance.”