Governors Not Paying Minimum Wage Are Breaching the Law — Ngige 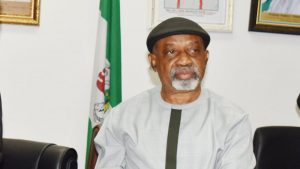 The Minister of Labour and Employment, Dr Chris Ngige, has faulted governors yet to pay the new minimum wage to workers in their states.

Speaking during an interview on Sunday, he stated that any employer paying its employee below N30,000 was doing so in contravention of the law.

“If you read the Act well, you will see the applicability of the Act. The applicability is that all parts of the federation (Section II); Section III also says N30,000 shall be paid, the operating word is shall.

“It does not give room for picking and choosing, it is a must. The state governors that are not paying are breaching the law of the land,” the minister said.

President Muhammadu Buhari signed the Minimum Wage Repeal and Re-Enactment Act, 2019 into law on April 18, 2019. The Act makes it compulsory for all employers of labour in the country to pay a minimum of N30,000 to their workers and gives workers compelled to accept salary less than the amount the right to sue their employer to recover the balance.

‘Take Them To Court’

The law, however, excludes persons employing less than 25 workers, persons who work in a ship that sails out of jurisdiction, and others in other kinds of regulated employment that are accepted by the Act.

Two years after the President assented to the Act, some states have begun to pay civil servants the new minimum wage while others still struggle to do so as a result of inadequate funds.

In his reaction, Ngige faulted governors negotiating with the labour unions in their states over the payment of the minimum wage to workers. According to him, they are getting the issues mixed up as the minimum wage is different from the Collective Bargaining Agreement (CBA).

“This is a national law that states what you will pay to the lowest-paid employee (worker) in your establishment; state governments are employers… they are caught in the web of this law until repealed.

“Any state government or employer that negotiates minimum wage like some of them are doing with their unions, they are running foul of the law,” the minister stated.

Asked what the next action would be for erring governors, he said, “I am negotiating with the Attorney-General of the Federation (AGF); the law permits me to take them to court.

“I can take any employer to court. If governors have immunity, I can start from the secretary to the government, to the head of service, and go down to the State Executive Council; take them all to court and I do not need any permission.”