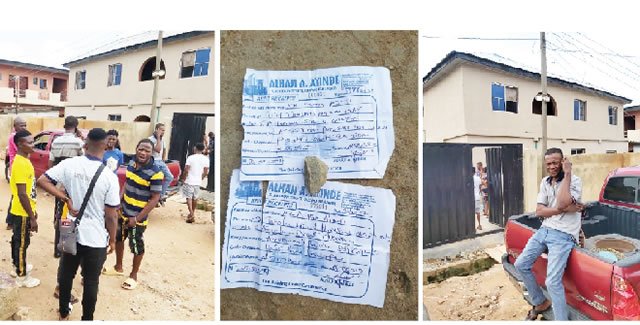 Ahmed Ayinde, a dubious property developer, has been arrested by men of the Lagos State Police Command for allegedly defrauding no fewer than 100 prospective tenants in the Olowo Ira area of the state.

It was gathered that the victims paid for different flats in a one-storey building on No 5, Ayedun Street, Olowo Ira, being developed by Ayinde.

After receiving payments, it was learnt that Ayinde and his accomplices told the prospective tenants that they needed some time to complete renovation works on the building. 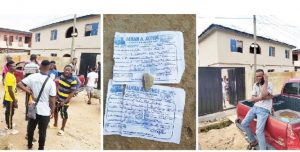 It was agreed that after the renovation was completed, keys to the respective flats would be handed over to the tenants.

However, drama ensued on Wednesday when efforts by some of the prospective tenants to access their flats proved abortive.

A victim, Sunday Akinmoladun, said he was surprised that over eight persons paid for the same flat he paid for, adding that a lot of intending tenants were stranded because people had occupied all the flats in the building.

He said, “I paid N300,000 cash for a room into one Ibrahim’s bank account. I paid since March 2021, but could not pack in because they said they were renovating the house. I have been coming to the house almost every day and usually meet an engineer and bricklayers working on the building.

“I was told to come and collect the keys to my flat today when everything changed. I have been calling Ibrahim, but his number is not connecting.”

Another victim, Tawakalitu Adetoro, said her husband, Saka, paid N350,000 for a mini flat in January 2021, adding that her family had been rendered homeless due to the incident.

She said, “My husband paid N350,000 for a mini flat in the building when I was pregnant. He paid the engineer and one Biggy since January 2021. As I speak with you, the landlord of the house we currently reside in has dumped our loads outside; we are now homeless.

“What they have been telling us is that they are making some repairs in the building. We were told to come and collect the key to our flat on Saturday, but people gave us information that people had been packing into the house since Wednesday. We don’t know where to get money to pay for another flat.”

A victim, who spoke on condition of anonymity, said over 100 intending tenants were swindled of about N500m, adding that all the affected victims had compiled their names for proper investigation.

He said, “We have 13 flats in the building and nine people paid for just a single flat; it is the same thing in all the other flats. More people are still coming to claim that they also paid.

“Some of the victims paid for two or three years. I personally paid for two years and each flat cost N450,000, depending on the bargaining power of the tenants and the developers. They even collected half payment from some victims.”

The state Police Public Relations Officer, Muyiwa Adejobi, said the X-Squad Unit of the State Criminal Investigation and Intelligence Department, Yaba, had commenced investigation into the matter, adding that a suspect had been arrested.

He said, “Alhaji Ahmed Ayinde is the developer who owns the company in charge of the project. They were trying to renovate the building and collected money from intending tenants.

“Unfortunately, the tenants couldn’t get the apartments they paid for. We have a suspect in custody, and we are trying to get other accomplices.

“They have provision for just 15 people, but they went ahead to collect money from many people. We want to assure the victims that justice would be done in this regard.”