The Presidency on Sunday attributed the delayed delivery of 12 Super Tucano jet fighters for the Nigerian Air Force to fight insecurity across the country to comments by those it described as “the opponents of the Nigerian government” including the Catholic Bishop of Diocese of Sokoto, Mathew Kukah. 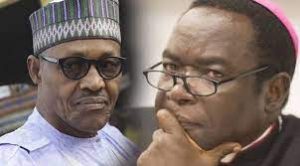 The Presidency revealed that the reasons given for the delay—poor interreligious relations between Christianity and Islam in the country—were compounded by constant lobbying of US Congress by the government’s opponents, including Kukah.
These were contained in a statement signed on Sunday by the Senior Special Assistant to the President on Media and Publicity, Garba Shehu, titled ‘Predicting Nigeria’s collapse is a perennial pursuit of US think tanks and policy experts.’

It also said that the United States’ policy and support to Nigeria have been so inconsistent over the years, especially as regards the provision of military equipment to fight the decade-long insecurity in the Sahel region.

The presidency also berated the US policy experts and think tanks for their perennial attempts at predicting the country’s collapse; which, it said, does not paint a true picture of a country that has enjoyed 23 years of steady democracy 29 years since its last coup.

The statement partly read: “It is a pity therefore that US policy and support towards our country, including during the Buhari administration, has been so inconsistent.