Lagos State Government has restated its commitment to deliver the Blue (Marina-Okokomaiko) and Red (Marina-Agbado) rail line projects in first quarter of 2023.

It warned residents on the Orile-Badagry axis that the blue rail line tracks would be powered electrically, which makes it deadly to walk on them. 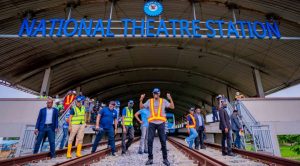 The state governor, Babajide Sanwo-Olu, who spoke yesterday after the inspection of the projects, threatened to go after those vandalising and selling the iron median used as track barricades, adding that the companies buying the iron will be shut down.

He also promised that all the vandalised barricades would be repaired soon for the safety of residents.

Sanwo-Olu said for the firm to meet up with the deadline for completion of the blue line, the contractor had been working seven days a week.

According to the governor, when the train starts operation, extra security measures would be put in place to ensure the safety of passengers, including installation of Central Circuit Television (CCTV) cameras to monitor activities.

Sanwo-Olu said the state would bring in additional two sets of four train coaches from China by September and October in preparation for the kick-off of the operation.

Meanwhile, the governor, who made a stopover at the Apongbon Bridge that was earlier gutted by fire some weeks ago, gave the traders still under and around the bridge another three days ultimatum to vacate.