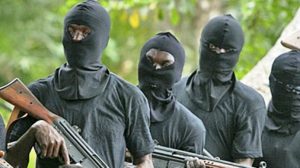 Tension has gripped Ovwian community near Warri in Delta State as four gunmen suspected to be hired assassins trailed a landlord in the community to his home and shot him dead.

It was gathered that the incident occurred around 4.38pm on Monday. It was learnt that the middle-aged landlord was a resident of Old Ekete Road, off Ovwian, near Warri.

Sources said the gunmen followed the landlord as he was driving home after the close of work. The gunmen reportedly trailed the man to his residence before firing at him.

Eyewitnesses said the gunmen who shot in the air to scare residents, ensured that their target passed away before they quickly jumped into their vehicle and escaped without taking any item from the man’s residence.
The incident was said to have created pandemonium in the area as people were seen running helter-skelter.

Sources said the landlord died while being rushed to an undisclosed hospital in Warri.
It was also gathered that personnel of the Delta State Police Command had since visited the scene, while the corpse had been deposited in an undisclosed morgue in Udu.