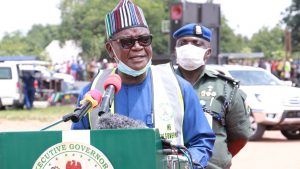 Tiv Youth Organisation (TYO) has asked the Presidency to explain the meaning of its call on Governor Samuel Ortom to cooperate with President Muhammadu Buhari to end killings in his state.

President General of TYO worldwide, Timothy Hembaor, in a statement made available yesterday, insisted that without the clarification, the Presidency had further strengthened the people’s conviction that it was complicit in Benue killings, to clear the land for Fulani herders to graze openly in the state.

The Senior Special Assistant to the President on Media, Garba Shehu, had a few days ago, said: “Benue, under Governor Ortom, ought to cooperate with the federal government in the implementation of a number of strategic programmes in addressing underlying issues militating against peace, progress and development.”
The statement irked Hembaor to ask for clarification from the Presidency.

The Tiv youth leader stated: “Ordinarily, TYO wouldn’t have wasted its energy responding to a statement made by Shehu, who has the antecedent of biting the fingers that fed him, once his pocket is lined as reflected in the manner he relates with his former boss, Atiku Abubakar.

“Is he (Shehu) referring to cooperation in the implementation of Ruga, cattle colony, grazing reserves and routes as well as acquiescence to a conquest and occupation agenda? What does Shehu mean by stating that Ortom only sees the problem of others, but he doesn’t see his own?”

Hembaor was optimistic that if Ortom had referred to President Muhammadu Buhari to address killings in Benue, then he was addressing one of his problems, and that is genocide being carried out on his people.

“As the umbrella body of Tiv youths worldwide, whose ethnic group, along with others in Nigeria, has been singled out for annihilation by the present administration, in accordance with an agenda, we have concluded that the killings in Benue are being supported by the Presidency.”