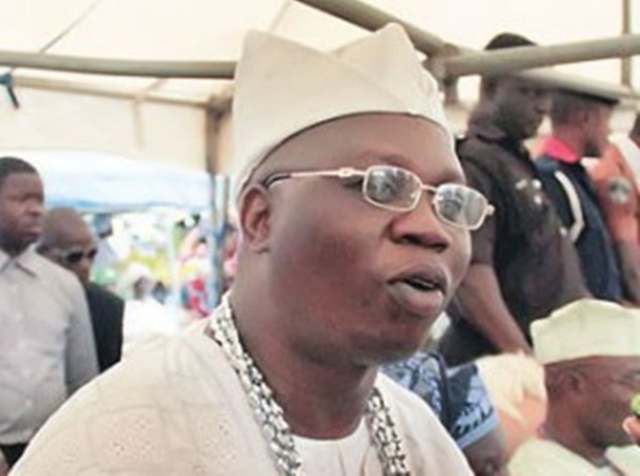 The Aare Onakakanfo of Yorubaland, Iba Gani Adams, yesterday, said God would not forgive President Muhammadu Buhari if Nigeria goes to war, adding that the calls for secession are genuine and legitimate.
This came on a day the National Treasurer of the Peoples Democratic Party, PDP, Mr. Wale Aribisala, decried the current wave of insecurity across the country.
Speaking at his 51st birthday thanksgiving programme, held at the Saviour Ministries C & S Worldwide, Alausa, in Lagos, Aare Adams expressed worry at the growing spate of insecurity across the country.
He said: “Schools are being shut, churches, mosques are not spared. Bandits are gradually leading the country into a tailspin and the president seems to have been bereft of ideas.
“What we experience daily now in Nigeria is enough to set the country on fire; a section of the country lording itself over other sections.
Yet they said we shouldn’t talk, that our calls for O’odua Republic were done in bad faith. How can you explain the killings, kidnappings and banditry spreading in North, East, West and South?
“One of the greatest problems of this government is nepotism. One begins to wonder why Mr. President is insensitive to the plights of others, especially, to the sorrow and agony of citizens losing loved ones to bloodshed. In sane climes, love transcends ethnic, racial or political boundaries. You must blink with pain to see people die or university students being killed amounts to cold-hearted indifference.
“It is a wakeup call for President Buhari to address all these issues in the interest of this country; else God will not forgive him if Nigeria disintegrates through war,” he said.
Meanwhile, speaking at a different forum, the PDP treasurer, Mr. Aribisala said the APC has completely lost the will to ensure the security of lives and property of the citizens.
Aribisala spoke at the weekend in Ado-Ekiti, while unveiling his campaign organisation team which has a former chairman of the party in the state, Mr. Bola Olu-Ojo as the Director-General.
He said: “Today, we cannot travel without feeling apprehension of being kidnapped, that’s how bad our security setup is. The president and his team have completely lost it.
“They lied to Nigerians and we can see the damage they have done to our country across all sectors. There is poverty in the land and there is no hope because the federal government is not doing anything tangible to savage the country.”
“What we need now are people with good ideology, with quality leadership, who could use their knowledge to revamp the economy, ensure security and bring succor to the people.”