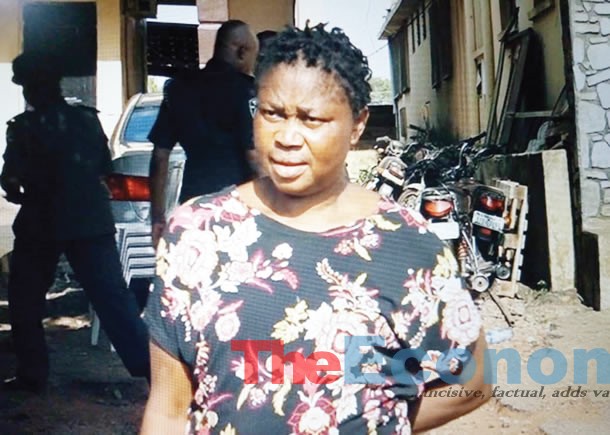 Operatives of the Ogun state Police Command have arrested one Mrs Florence Ogbonna, who allegedly operates baby-making factories in the state. The command had recently busted two baby factories and freed more than 20 victims, including pregnant teenagers and children. The factories, which were located in Ofada and Mowe, Obafemi-Owode Local Government Area of the state, were linked to Ogbonna.

The Police Public Relations Officer in the state, DSP Abimbola Oyeyemi, told journalists that Ogbonna, who was standing trial for human trafficking, jumped bail and bolted following the newly-discovered baby factories linked to her. It was gathered that after about two weeks of manhunt, the police apprehended the suspect.

Speaking with journalists at the Zone 2 Command in Abeokuta, on Monday, the suspect denied selling babies, but said she was “only helping young ladies, who need help.” The self-acclaimed nurse also denied jumping bail, saying she took permission to attend her daughter’s wedding.

Ogbonna stated, “I have nine children; I attend to people, mostly young ladies, who need help. I don’t sell babies; I only help those who are in need and God has been helping me. I don’t go and meet anybody, they come to me.

“I registered a motherless baby home; I registered the Divine Child Care with the CAC (Corporate Affairs Commission). I have not registered with the Ogun State Ministry of Women Affairs and Social Welfare, because I am still building where I put the children. I did not know about any baby you are talking about.

“I didn’t jump bail and I didn’t run away; I told my lawyer to help me because I wanted to go for my daughter’s wedding and I have another burial; I cannot be going and coming because of my health. I was away for the burial when the police went to our house and arrested the children.”