The federal government has announced that the new International Airport Terminal in Lagos, reportedly worth $38 million, will be opened in 2021.

This was disclosed by one of the media aides of President Muhammadu Buhari, Tolu Ogunlesi, via his Twitter handle on Monday. 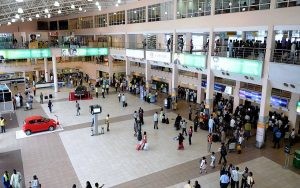 In May 2020, the Federal Government revealed its plan to invest $38million in the rehabilitation of the Murtala Muhammed International Airport, Lagos terminal.

The Minister of State for Aviation, Hadi Sirika, had explained that the airport needed a revamp due to its poor state, which has outlived its usefulness. He further noted that the terminal was built to handle 300,000 at inception but the passengers it handles have grown to 8 million in the past three years.

“We require to spend $38m as palliative on the refurbishment of the international terminal in Lagos. This airport was built in 1979 and intended to carry just 300,000 passengers annually, but it now carries over eight million yearly. With the continuous over-use of its facilities, the amenities will not last for long.”