The federal government on Thursday met with the striking members of the Academic Staff Union of Universities (ASUU) and other unions.

The meeting was chaired by the Chief of Staff to the President, Professor Ibrahim Gambari and had in attendance the Secretary to the Government of the Federation, Boss Mustapha, the Minister of Labour and Productivity, Senator Chris Ngige, the Sultan of Sokoto, Muhammad Sa’ad Abubakar, the President of the Christian Association of Nigeria, Samson Ayokunle. It was held at the banquet hall of the State House in Abuja, the nation’s capital. 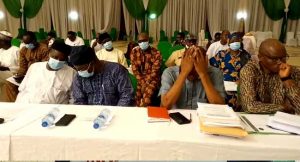 Others present were the President of the Nigeria Labour Congress, Ayuba Wabba, ASUU President, Professor Emmanuel Osedeke, Presidents of the Senior Staff Association of Nigerian Universities (SSANU) and the Non-Academic Staff of Union of Universities among others.

The Chief of Staff informed the gathering that the meeting was under the directive of President Muhammadu Buhari who he says is concerned about the strike action and its impact on the Nigerian students.

While appealing to the lecturers to call off the strike, Gambari reiterated the Federal Government’s resolve to address the issues affecting the striking ASUU members.

The meeting was held few hours after President Buhari appealed to ASUU to consider the plight of students and call off its ongoing strike.

He made the appeal at the 19th National productivity day and conferment of the National Productivity Order of Merit award held on Thursday.

The President equally urged students in public tertiary institutions to exercise patience as the Federal Government is striving to address the nagging issues in the nation’s university system within the ambit of available resources.

Buhari’s appeal came two days after the union extended its industrial action, accusing the government of unwillingness to address its demands.