Iro was suspended by the State Working Committee, SWC, of the party at its meeting on Tuesday, May 10 at the party secretariat Umuahia. 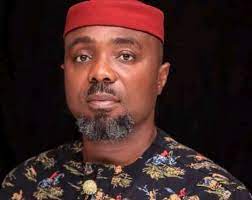 PDP in a statement Wednesday, said Iro was suspended for one month for making unguarded utterances that brought embarrassment to the party.

The statement signed by the Vice Chairman of the party, and Chairman for Abia North, Elder Abraham Amah, said the Secretary overstepped the bounds of his office.

PDP’s statement sighted by newsmen in Umuahia read in part:”That the state Secretary should proceed on one month suspension with effect from May 10, 2022, for acting outside the purview of his office which caused an embarrassment to the image of the party”.

This is coming barely 72 hours after the Secretary in an exclusive interview, insisted that the party had not conducted its three-man delegate congress contrary to claims by the Governor, Okezie Ikpeazu.

Gov. Ikpeazu had in a viral video, commended the success of the exercise in his Ward 7 in Obingwa, but the Secretary in the interview insisted that the exercise had not taken place in any part of the state.

He equally said that the members of the panel sent from the party’s National secretariat had not even been formally introduced to the state leadership of the party.

Meanwhile, PDP in the statement conveying the suspension of the Secretary, admitted that the process of choosing delegates for the party’s primaries had not been concluded, thus vindicating the suspended party Scribe.

An insider at the State Working Committee, SWC, meeting where the decision to suspend the Secretary was taken, confided in our correspondent,how the voting went.

The source which pleaded for anonymity said that after hearing from the Secretary his defense over the said press interview, a motion for his suspension was moved and put to vote.

According to the source, out of the 14-member SWC, only four voted in favour of his suspension while two voted against.

” Five persons declined while one person was absent. Two of those who voted for his suspension are aspirants and you can be sure they were simply obeying directives”.

Protests and counter protests have trailed the conduct of the party’s three-man delegate congress with some aggrieved party members calling for the sack of the State Chairman, Rt. Hon. Asiforo Okere.

Some party elders including the immediate- past Secretary to State Government, SSG, Dr Eme Okoro; and former Chairman of the Niger Delta Development Commission, NDDC, Chief Onyema Ugochukwu, have both petitioned the National Chairman of PDP, Senator Iyorchia Ayu, seeking his intervention.

Former Senate President, Senator Adolphus Wabara, had also expressed displeasure over the decision of the party to simultaneously zone its governorship ticket in 2023 to Abia Central and Abia North senatorial zones, a move he alleged was a ploy to actualise the much-rumoured Ngwa self succession agenda.

He warned that PDP might lose Abia in 2023 if the party gave its ticket to an Ngwa against the prevailing power arrangement in the state.

In less than 12 hours after media publication of his warning, Senator Wabara was also fired as the Chairman, Governing Council of the Abia State University.

Meanwhile, former Chairman of PDP in the state, Senator Emma Nwaka, has expressed worry over the recent developments in the party which he said, could badly affect the fortunes of the party in the 2023 polls.

Nwaka who said people had been asking him why he had remained quiet over the growing tension in the party, explained that he had been trying to find solution to the “zoning-induced in-fighting through the back channel”.

He, therefore, appealed for a cease fire and peace to avoid the party playing into the waiting hands of the opposition.

Senator Nwaka who is also seeking the Governorship ticket of the party said he felt sad that the party he nurtured was engrossed in in-house fighting.

“You all know how much I laboured to reposition the party and return it to its winning ways. So what’s going on grieves my heart.

“As a democrat and a man of peace, I’ve chosen the backroom approach in trying to douse the inferno.

“I’ve been meeting and talking to stakeholders to see how we can find a common ground. It’s not an impossibility to come to an amicable solution for the good of Ndi Abia, who have kept faith with PDP over the years.

“We owe them the responsibility to install a government that will serve their economic and social needs.
Politics should not be a zero-sum game. It’s human to make mistakes and very honourable to know when to change course in the best interest of our people.”