Fayemi: We Need to Tackle Inequality to End Insecurity 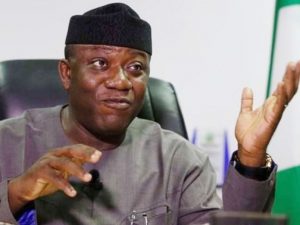 The Governor of Ekiti State , Dr. Kayode Fayemi has identified inequality, poverty and unemployment as the triggers of insecurity nationwide, thereby calling on governments at all levels to address these challenges to restore order in the country.

He made this recommendation in Ibadan, the Oyo state capital, at a symposium organised by Shina Peller, lawmaker representing Iseyin/Itesiwaju/Kajola/Iwajowa constituency in the House of Representatives.

He organised the symposium as parts of activities to mark his 45th anniversary under a theme, National Security and Peace: Role of Government, Citizens and Institutions.

At the symposium, Fayemi noted that the country’s security challenges “are surmountable provided the political leadership can agree to address causes that trigger armed attacks and banditry across the federation.”

Fayemi, Chairman of the Nigeria Governors’ Forum (NGF), called on Nigerian youths to be more active in politics rather than focus their attention on the Twitter revolution.

He said: “Nigeria is going through challenges that can be overcome if all Nigerians are committed to transforming the country. It is important to be tough on the triggers of crises such as inequality, poverty and unemployment.

“We must all agree that the country at present is facing serious challenges, most importantly security. There is no doubt that we can overcome them as a nation.

“All we need to do is for governments to be tough on the causes that trigger crises most especially inequality, poverty and unemployment,” he said.

“It is when they are in positions of authority that the youths can make a positive impact in the lives of their people. The best way for youths to contribute positively to their communities is to get themselves involved in politics.

“Our youths should not just be Twitter revolutionaries. They have to get themselves in politics, so that they can contribute positively to their societies.

The keynote lecturer, Prof. Olawale Albert called for devolution of power in order to have effective and efficient security apparatus to manage the myriad of security challenges facing the country.

Albert, a professor of Peace and Conflict Studies at the University of Ibadan, observed that Nigeria is in a war with itself and that part of the solution is to operate with justice, equity and fairness to all.

The professor urged Nigerian leaders “to accept the situation of the country and ensure a change instead of denying the tribulations the country is facing.”

Power, he said, must be given to local governments and traditional rulers.

The wife of the celebrant and Executive Director, Lead Generation Initiative, Mrs. Ayobola Peller, expressed worry over the state of insecurity in Nigeria.

He stated that the Lead Generation Initiative “is committed to pursuing the implementation of the recommendations of the symposium through advocacy and stakeholders engagement after the event.”

The celebrant, Peller said said this year’s birthday celebration had been a reflection of what life has to be.

According to him, considering the case of insecurity that is ravaging the country, the Lead Generation decided to mark my 45th birthday with a public roundtable for sustainable solutions to myriads of security challenges facing Nigeria.

“I believe we will all die one day. But if I die, what will I be remembered for? With what Lead Generation is doing, I see a reason we have to build a platform that can imbibe the kind of culture we should have as Nigerians”.

Traditional rulers present include the Olubadan of Ibadanland, Oba Saliu Adetunji and the Oluwo of Iwo, Oba Abdulraseed Akanbi, among other dignitaries.