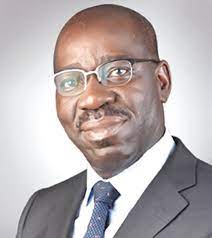 The Edo State Governor, Godwin Obaseki, has reportedly beaten a retreat in his recent face-off with the People’s Democratic Party (PDP). Sensing the negative reactions that greeted his recent meeting with some leaders of the Peoples Democratic Party (PDP) to allegedly dissolve the leadership of the party from the ward to the state level in order to accommodate his loyalists who came from the All Progressives Congress (APC), the Governor has met with the State Working Committee (SWC) of the PDP again at the Government House in Benin-city recently.

In the letter addressed to the National Chairman of the party, Prince Uche Secondus, the state PDP alleged that Obaseki was being misled by three categories of people in the party which they identified as aspirants for the 2023 and 2024 elections; members of the party who lost during the party’s congresses and godfathers they said came with the governor from the APC to the PDP but have refused to register into the party (PDP) in their wards.

A source close to the venue said: “But with the meeting said to have been held last Wednesday evening, tension may have reduced to a reasonable level.”

At the meeting as reliably gathered, the governor was said to have expressed his unhappiness over the position of the SWC which he said was “too hard” on him.He was said to have told them that contrary to insinuation, he is not taking them for granted and that he remained grateful to the PDP for giving him the platform for his re-election after falling out with his former party, the APC.

The governor was said to have told the SWC members led by Dr. Anthony Aziegbemie that he has been receiving calls from his colleague governors across the country and business associates, who expressed concern that he was falling out with the party that brought him back to power so soon.

According to the source who craved anonymity, “The meeting was cordial. It was called by the governor where he appealed for calm. He told us that he has been receiving calls all over the country over the development.

“The meeting ended well and he wants us to bring our suggestions on the way forward, which is expected to be forwarded to him on Friday (today).”