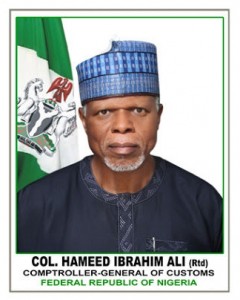 The Comptroller-General, Nigeria Customs Service (NCS), Hameed Ali has revealed that 66 officers found to be hooked on hard drugs would be eased out.

Ali disclosed this while addressing officers and men of the Plateau/Benue Area Command of the service in Jos. “We are now operating zero tolerance on the issue of drugs, because it is very dangerous and inimical to our operations and to our success as a government revenue generating organ.

“These 66 identified drug-addicted personnel are as good as out of the system because we have no place for such persons in the service,” he said.

Ali blamed the existence of ”bad eggs” in the service on the recruitment system, which, he said, had to be changed to rid it of unscrupulous and unwanted persons.

He charged the officers to be disciplined in order to serve the nation well and gain their promotions.

According to Ali, promotions from now must be earned.

He told the officers to display the fear of God in all their operations and to be diligent in attending all the courses lined up for them.

He expressed hope that the service would meet its 2015 revenue target of N944 billion before the end of the year.

“Presently, we have generated N825 billion but we have to double up so that we will not only meet the target but surpass it by God’s grace,” he said.