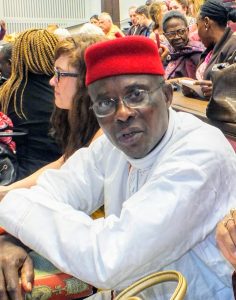 I have neither been a fan of Mr. Frank Atuche, the now estranged former Chief Executive Officer of the defunct Bank PHB nor had the cause to come close to him for any reason, except on one occasion during a wedding reception. But that notwithstanding, he has remained one of the young entrepreneurs of his times I have come to admire for their creative ingenuity woven in dexterous foresight.

Similarly, in principle I might not be at home with issues of fraud of any type, be it financial, economic or political, but with my knowledge of the deep-seated interplay between legal mechanisms and their manipulative political character, I am well convinced to say that Mr. Frank Atuche was a victim of political conspiracy ignominiously sacrificed on the altar of Fulani political inquisition for the propitiation of higher Fulani objectives.

It is therefore obvious that Frank Atuche’s conviction was not only politically motivated but was one of the conspiratorial outcomes of a long-drawn and still on-going incendiary Fulani scheme of criminal appropriation of Nigeria’s major economic and financial sectors through their unguarded and unchallengeable colossal political powers.

It is important to point out that I am not in any way attempting to exonerate Mr. Atuche from the crime of fraud which a competent court of jurisdiction has pronounced, but my concern is the moral fulcrum on which the trial and subsequent appropriation of his bank by the same class of people who put him on trial was predicated, bearing in mind that he who seeks equity must come with clean hands.

The big question here is how does the moral weighting of a twenty-five billion naira fraud paid with six years imprisonment and refund of the said amount, match the appropriation of the same bank at less than the amount purportedly stolen?

And in driving towards this objective, every means must be adopted to invalidate Mr. Atuche’s capacity to retrieve the bank in future. Even looking at the length of the judgment— 12 hour Judgment duration and the fact that the case took ten years to conclude, it was obvious that the Judge was unusually detailed in his judgment in order to be sure that a case of fraud was established by every possible means.

Needless to argue over the legal predilection of a case of fraud that was indeed legally established, as His Lordship Justice Lateefa Okunnu of Ikeja High Court stated: “By stealing from the bank, they stole from innocent customers of the bank.”

But the question is did Frank Atuche actually steal from the customers, or the shareholders? This question is pertinent because it should be noted that the bank did not go into bankruptcy like her counterparts and there was no issue of either the inability of the bank to pay her staff or meet the needs of her customers for any amount of withdrawals; neither were the staff nor the shareholders not paid their entitlements before its criminal appropriation by the Fulani political syndicate.

Moreover, Bank PHB began as a one-man business before it grew to the status of a big incorporated bank, courtesy of the tireless efforts and creative acumen of Mr. Frank Atuche. I began to associate with the bank far back in 1999 when it was operating as Platinum Housing and Loan at Allens Avenue, Ikeja Lagos. So there was no questioning of the creativity and enterprising ingenuity of Frank Atuche.

It is disheartening that an enterprise so founded by the tireless effort of one man could be appropriated by another man through a single stroke of a political pen by virtue of being a clandestine shareholder to the Federal Government of Nigeria Incorporated.

But all these attributes were never considered in any criminal process, particularly in a nation where impunity is not only Government-protected but celebrated as an act of political bravery.

It was clear that right from the point when the bank was appropriated by the Asset Management Company of Nigeria (AMCON) through the Central Bank of Nigeria under the loquacious dethroned Emir of Kano Alhaji Sanusi, it was clear that the Fulani political syndicate earmarked the bank for their appropriation in line with Sanusi’s clandestine policy of Fulanization of the Nigerian financial sector.

According to William Ikpe writing for the online news media Nairametrics, in his judgment penultimate to conviction, the learned Justice Lateefa Okunnu stated that both Mr. Atuche and his Chief Financial officer stole from the bank using well-recognized stockbrokers to transfer money belonging to the bank under the guise of loans and shares.

That was no doubt a convincing evidence of fraud within the banking system, but then there was the question of the fraudulent appropriation of the bank by a member of the Fulani ruling cabal which was even a more heinous act of fraud than what Frank Atuche committed but was swept under the political carpet.

We were reliably informed that the EFCC had intervened in this case of fraudulent sale of the bank to Alhaji Isa Funtua who was President Muhammadu Buhari’s close friend and business front-man but up till date nothing has been reported about the said investigation.

The first point of criminal acquisition of the bank was the unconstitutional removal of the Igbo-born Executive Officer of the Asset Management Company of Nigeria (AMCON) Mr. Chike Obi and his subsequent replacement by Alhaji Isa Funtua’s Son-in-law Alhaji Ahmed Kuru. The first question here is how does one define Alhaji Kuru’s sale of Keystone Bank to his father-in-law in moral terms, bearing in mind that the same Alhaji Kuru in like manner sold 9Mobile (Etisalat) to the same man?

The second point of criminality involving the appropriation of the bank by Alhaji Isa Funtua is its sale at the paltry sum of 25 billion naira without the legal approval of ninety percent of the Board members of the Asset Management Company of Nigeria (AMCON); whereas Mr. Frank Atuche was convicted for misappropriating the sum of 25.7 billion naira, which he was asked to refund by the court.
Indeed before the sale of Keystone Bank to Alhaji Isa Funtua all the bad debts associated with the bank which was of insignificant value were disposed of by AMCON, and so there was no question of the bank being burdened by large debts as the reason for its criminal undervalue. It should be recalled that the same Alhaji Kuru had earlier sold less viable banks at exorbitant prices. For instance, Enterprise Bank was sold for over 60 Billion naira, while Mainstreet Bank was sold at over 100 Billion naira.

Apart from the obvious fact the transactions leading to the sale of Keystone Bank lacked transparency and was evidently painted in fraudulent deals with the official connivance of both the Central Bank and NDIC, even the manner of the payment of the said undervalued price of 25 Billion naira was coated with more flagrant act of official-backed criminality.

But the fact is that in official AMCON transactions complete down payments are made before the physical appropriation of any firm. This was never the case with Frank Atuche’s Bank PHB, being a political orphan par excellence. Perhaps it will serve better in our judgment of values if we quote from the expert analysis of this process of fraudulent acquisition of Keystone Bank against the background of Mr. Frank Atuche’s conviction for misappropriation of the sum of 25.7 billion naira from his private banking firm.

As one of the popular online news media Precise Post put it at length in its 29 July, 2020 edition noted:
The corrupt payment for Keystone Bank, the most disgusting part of the entire sale of keystone Bank is how the 25 Billion Naira sales price was paid to AMCON. The Isa Funtua Team paid 5 Billion Naira to AMCON, and then the balance of 20 Billion Naira was later paid through the most criminal and corrupt approach ever perpetrated by AMCON in favour of the Buyer. What happened was that AMCON moved 20 Billion Naira of their own funds as a fixed deposit at GT Bank to Heritage Bank. Heritage Bank then paid the 20 Billion Naira on behalf of the Funtua Group to AMCON. In other words, AMCON used their own funds as a collateral for a loan to the Funtua Group for 20 billion Naira.

Ironically, the same 20 Billion naira was later paid by Keystone Bank after its acquisition through another round of clandestine borrowing. In other words, Alhaji Isa Funtua used Keystone Bank money to buy Keystone Bank from AMCON. As Precise Post further noted:

When the Funtua Group took over Keystone Bank, they went borrowing immediately at the interbank Market for 20 Billion Naira to refund AMCON’s funds. This has left a hole in Keystone Bank’s Balance Sheet and makes the Bank one of the most undercapitalized Banks in the country as today.

The fundamental moral question here is between Frank Atuche and the duo of Ahmed Kuru of AMCON and his father-in-law Isa Funtua who has more questions to answer before the court of law— Frank Atuche operated under the canopy of his personal investment, while both Ahmed Kuru and Isa Funtua operated under the criminal protection of the law? Can this not be rightly described as an act of Advance Fee Fraud code named 419?

This is the fundamental legal question Atuche’s legal team should address in any move for appeal, because Nigeria as a nation is doomed if we allow this kind of official impunity and reckless abuse of the moral contents of our law to stand.