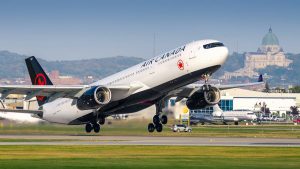 The Canadian government has announced that it is suspending all direct commercial and private passenger flights from Morocco effective until at least the end of September. The ban goes into effect at 00:01 EDT on August 29th. In accordance, airlines have already started to cancel flights.

Transport Canada announced that all direct flights from Morocco will be barred until September 29th, 2021, at the earliest. The ban has come after the country has seen an increase in positive test results in travelers arriving in Canada from Morocco over the past month.

Flights that are already en route from Morocco at the time of publication of the NOTAM will be allowed to proceed to Canada. However, all travelers on those flights will be required to take a test on arrival to Canada.

Air Canada flies to Casablanca. All of its flights are suspended for as long as the ban remains in place. It is offering passengers a full refund for those affected. Royal Air Maroc also flies between Morocco and Canada. It is also giving passengers flexible options.

Transport Canada is also introducing requirements for passengers coming from Morocco. Passengers who depart Morocco to Canada via an indirect route – say a transfer in Europe – will need to obtain a pre-departure test from a third country other than Morocco before continuing their journey to Canada.

So, if a passenger is trying to fly from Casablanca to Toronto in the coming days and plans to make a stop somewhere in Europe, the passenger will need to show proof of a negative test from a country in Europe before continuing to Canada.

The third-country testing requirement also goes into effect on August 29th, 2021, at 00:01 EDT. Passengers will need to prepare for the possibility of testing positive in a third country. Antigen tests are not accepted for entry into Canada.

The recent move from Canada comes as the country is preparing to reopen for fully vaccinated foreign nationals on September 7th. Currently, the country is accepting fully vaccinated American visitors who also provide negative test results. So far, that program has gone off well in Canada, and plans are still in place to continue with the reopening.

Americans can enter Canada if they provide proof of full vaccination. This means ending their vaccination at least 14 days before entering Canada. These passengers will also need to provide proof of a negative PCR test result taken within 72 hours of departure to Canada. Non-American visitors will likely face similar requirements as Americans have for the past few weeks.

Morocco is not the only country facing restrictions on nonstop flights to Canada. Flights to and from India are suspended until at least September 21st. Canada has taken a hardline approach to restricting international travel from places with a worsening epidemiological situation. The country is showing no signs of letting up on that policy.