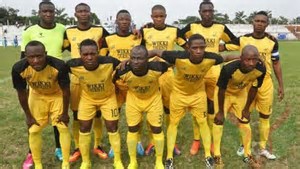 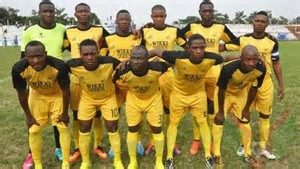 Nigeria’s representative in the 2017 Caf Confederation Cup, Wikki Tourist are confidence of advancing to the next round despite suffering a 2-0 defeat against the Royal Armed Forces of Sierra Leone in the first leg of their preliminary round tie on Sunday.
Striker, Omo Johnson is unfazed by the two goals deficit and has declared the players’ strong belief that they can overturn the deficit and eventually progress to next round of the championship after the second leg in Bauchi. “We will turn the table around by God’s grace. The problem with Wikki Tourist now isn’t that we are not playing well, we have a problem with luck in the team but that won’t be a hindrance when we host them (Forces) in Bauchi next weekend.
Johnson revealed that he and his colleagues know too well what is expected for the team to make it to the next round.  “There isn’t an obvious advantage these days but we have seen more of the team and we hope to do the needful in the second leg. I am very confident that we shall turn the table around in Bauchi and thus make the next round of the competition.”
FC Ifeanyi Ubah, Nigeria’s second representative in the competition are equally hopeful of their chances of advancing to the next round after a slim 1-0 victory against Al Masry SC of Egypt at Nnewi-Ozubulu in Anambra. Tamen Medrano scored the lone goal in the 87th minutes to secure maximum points for the debutant Anambra Warriors. The Federations Cup champions will strive to avoid defeat against their Egyptian opponent in the reverse fixture slated for next weekend in Port Said to advance to the next round.
By Olisemeka Obeche