Nobel laureate, Prof. Wole Soyinka, again came down hard on the ruling All Progressives Congress (APC) over the appointment of ex-Osun State deputy governor, Chief Iyiola Omisore, as its National Secretary. He expressed willingness to be involved in legal proceedings to unravel the killers of a former Attorney General of the Federation and Minister of Justice, Bola Ige. 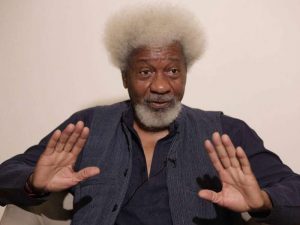 The fiery social critic said the former deputy governor’s choice was like ‘rubbing the death of late Chief Bola Ige on the faces of Nigerians’ and raised questions over President Muhammadu Buhari’s pledge to reopen the investigation into the case.

Ige, an ex-governor of old Oyo State, was assassinated by gunmen at his Bodija, Ibadan home on December 23, 2001. In 2002, Omisore was arraigned for Ige’s murder but was later acquitted alongside 10 others.

Soyinka, had in a statement last Saturday, said the resumption of an investigation into Ige’s murder was already hamstrung and disrobed of credibility with the emergence of a prime suspect in the case as the National Secretary of the ruling party.

Omisore, who replied to Soyinka’s position in a statement, instructed his lawyer, Kayode Ajulo, to write the Nobel Laureate, demanding a retraction of the comments.

Also yesterday, Ajulo, in an advertorial published in a national daily, explained how Omisore was discharged by Oyo State High Court of all allegations of complicity in the murder of Ige and going forward, “he has been instructed to activate legal processes against anyone for defamation and probable prosecution of any person who continues to make disparaging comments about Omisore not in tandem with the true representation of facts. ”

But speaking in Lagos, yesterday, at a media interaction titled, ‘Forget the past, forfeit the future: A nation seceding from humanity,’ Soyinka said there is a need to unearth the circumstances surrounding the death of Ige, which he believes would be of enormous value to the course of democracy and education.

“We are talking of somebody who was capable of attacking a Minister of Justice, taking off his cap in the palace of the spiritual head of a large group of people, that person is not fit to be seen as national secretary of a ruling party.

“Actions of disgracing and humiliating a highly respected individual, a traditional chief, a minister, who was a guest at the revered palace, that action alone and the consequence of it disqualifies whoever initiated that action from aspiring to a respected position.

“We heard a case of the judge who kept the diary, recording the pressure that he was receiving from very high quarters during that period. There are cases of vanishing witnesses and retraction of statements.

“I say to the leadership of the APC, I’m not talking to Buhari alone, I am saying what has happened to your sensibilities, were you so short of materials even within your party that you have to unleash scorpions on our memories, which we are just managing to forget since that event?” he asked.

The essayist stated that such a person should have been made an envoy if the party desired to give him a post, but not the secretary of a ruling party. “Even if President Buhari or the APC wanted to reward Omisore, he ought to have been given an ambassadorial appointment, even if it is to Ukraine and not a national secretary of the ruling party.

“We are talking of the party of those in charge of the governance and justice of this country; the leadership of APC and I am not talking of Buhari alone. Do you have to unleash scorpions on our memory? It is not Soyinka who provided this. It’s those who were so insensitive, who rubbed that murder in our faces. I will be delighted to go to court so that we can go into details. I ask the APC leadership to have a rethink because the issue will not go away.

“Those who want to go to court because Wole Soyinka said this, I will be delighted, then we can really go into details. Perhaps what we need is a judicial enquiry. The court had done their work; we accepted the verdict of the court. But there is a lot to be unearthed, which are of enormous value to the education and course of democracy,” he said.

He further decried the rising insecurity in the country leading to killings, kidnappings and violence in several states.

In his reaction, a human rights lawyer, Chief Femi Falana (SAN), said the killers of Ige must be found, noting that Soyinka had reminded the President of his pledge to open an enquiry into the country’s spate of political murders.

He pledged to render free services to Soyinka, if he was issued for exercising his freedom of expression, adding that he is taking on a matter that is of public interest and importance. “If you are sued, we will represent you free of charge because you are taking on a public issue.”

He emphasised the need for society to be humane. “The society should be about humanity, it was the late Justice Okocha who made the point, in the case of Josiah and the state, that when you talk of murder, when you are talking of justice in a murder case, it is a three-way traffic, not two, not one: Justice to the suspect or the accused, justice to the deceased, who is crying for justice in his grave and justice to society. It is three-way traffic.”

He added that in any civilised society, once the killers of anybody have not been found, the file should not be closed because information may come at any time.

“Sometimes they call it cold cases in the US, and these cases are in the archives. Anybody may turn up to say, ‘we have some information or I did it, I am having sleepless nights, I now want to open up.’ Sometimes those who are at the tail end of conviction are brought out of prison and those who have been killed are given some restitution,” he explained.
Meanwhile, the Nobel laureate, yesterday, admitted he preached against the re-election of former President Goodluck Jonathan. He, however, added that he urged the youth to mobilise for their candidate of choice.

Soyinka has been at the receiving end of criticisms from Nigerians amidst rising hardship and worsening insecurity. A lot of Nigerians blame the literary icon for the role he played in the election of President Buhari in 2015. Yesterday, he sought to push back the criticisms, insisting that he never endorsed President Buhari’s candidacy in 2015.

“It is false to say that I supported the election of Buhari,” he said, adding that what he said at the time was “do not vote for Jonathan.”
He admitted that although he didn’t support Jonathan’s second term bid, he now believes the former president “redeemed himself in such a magnificent way. Buhari never won the election, Jonathan lost it.

Soyinka maintained that what he said in 2015 was that if Nigerians elect Mr Buhari, they should support him as a born-again democrat and be allowed to carry out his duties.

He, however, said President Buhari failed Nigeria at its critical moments. “He failed when he went to Benue, after the killings by herdsmen, and told the people to live with their neighbours. Having been on the other side of power, he should have had a rethink, but alas, Buhari failed,” he declared.