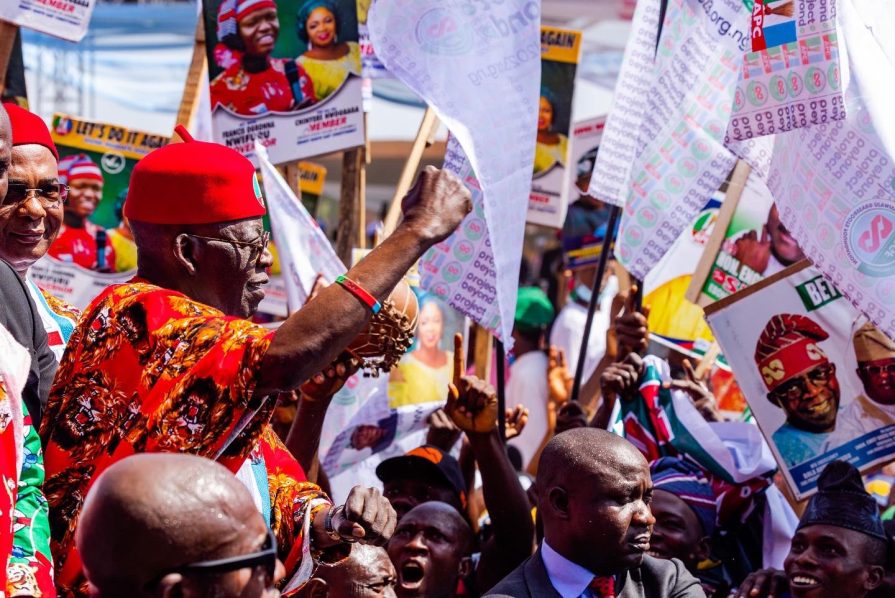 The presidential of the All Progressives Congress (APC) has arrived Abia State for the flagoff of the party’s presidential and governorship campaigns.

He arrived Umuahia from the Sam Mbakwe Airport where his flight touched down at exactly 1.55pm.

The Jagaban was welcome,e at the airport by the Imo State governor, Chief Hope Uzodinma, the APC governorship candidate for Abia, High Chief Ikechi Emenike, the National Welfare Secretary of APC, Chief Friday Nwosu, among other party chieftains.

Meanwhile, Umuahia, the capital city of Aba is agog with activities as APC faithful from every nook and cranny of the state have thronged the capital for “the mother of all rallies”.

The capital city is witnessing an unprecedented crowd of people participating in a political rally.

Umuahia Township Stadium, the venue of the mega rally is filled to the brim with all the adjoining streets have been taken over by party supporters.

Pro-groups dressed in their colourful uniforms are singing and dancing while displaying banners and posters of the various APC candidates for the 2023 general election.