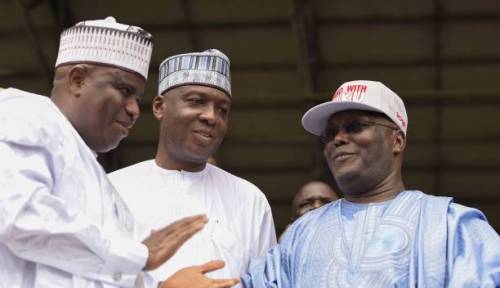 The 2023 presidential ticket of the Peoples Democratic Party has three major contenders: former Vice President Atiku Abubakar; former Senate President, Bukola Saraki, and Governor Aminu Tambuwal of Sokoto State.
According to confidential report from a former senator and member of the party’s Board of Trustees, considering the time restraint to the election and the timetable announced by the Independent National Electoral Commission, it will be difficult for a new entrant to join the presidential race.
He also added that PDP leaders in their quest to give the 2023 election their best shot have decided that they must field a “known name whose antecedent and capability is well known”.
He said a new entrant may only join the race if the PDP decides to zone the presidential ticket to the South, which is unlikely.
He said, “The primaries will be held either in June 2022, going by the proposed Electoral Act under consideration by the National Assembly or latest by October, if the existing law is applied. That leaves either 13 months or 17 months for any entrant into the race.
“The time appears too short for a new entrant. The resources and structure necessary for a good race may also not be readily available now for any new candidate.
“More importantly, PDP leaders have decided that they must take a known name whose antecedent and capability is well known.
“The only reason why a newcomer may come in is if the party eventually decides to go to the South to shop for a candidate. That is if the party eventually zones the ticket to the South. Former Anambra Governor, Peter Obi, may come into the race. He is a known name who also featured in the last ticket of the party as running mate.
“Outside these calculations, it is almost impossible for any new entrant to make any serious impact in the presidential race.
“Between Atiku, Tambuwal and Saraki, they already have the potential delegates committed to them. They also have the resources and the key contacts that are supporting them and ready to go on mobilisation efforts.
“What is not clear is if Atiku who came first in the presidential primaries of 2018 will retain that position, if Tambuwal who came second in 2018 will become the flagbearer or if Saraki who came third then will overtake the other two and come first.
“It will be interesting to see the three leading aspirants trying to outdo each other to get the party’s ticket as the PDP has a good chance to win the presidential race in 2023 judging by developments in both the ruling political party and the polity,” he said.
In October 2018, the trio were the top contenders in the presidential primary of the PDP held in Port Harcourt, Rivers State, to determine PDP’s candidate for the 2019 presidential election.
While Atiku polled 1,532 votes to emerge the winner of the primary, Tambuwal garnered 693 votes to place second while Saraki came third with 317 votes.
Although the 2019 Election Review Committee of the party led by Governor Bala Mohammed of Bauchi State had asked the party to throw open the contest for the party’s presidential ticket in 2023 to all qualified aspirants, there are feelers that many of the powerbrokers of the party want the North to produce the candidate.
On the chances of former Kano State governor, Rabiu Musa Kwankwaso, the source, said, “As it is today, Kwankwaso that would have also broken the ranks of the trio of Atiku, Tambuwal and Saraki, is said to be too limited by the restrictive nature of his political structure which is known only in Kano.
“Though he has the Kwankwasiyya group in some states of the federation, he is only on the ground in Kano State and how can that help a nationwide presidential campaign?” he asked.
“More importantly, his recent problems with top PDP leaders like Ambassador Aminu Wali and his group over zonal party leadership will also do more damage to his suitability as party flag bearer.”
Chief Ebenezer Babatope, a former Minister of Transport, said the leadership of the PDP will be wasting its time if it fields a candidate that is not capable of winning elections.
He said the party must field a candidate that is acceptable to all Nigerians and one that will shun tribal, religious sentiments and unite the country.
“We must choose a candidate that will cut across party affiliations, party interests and appeals to all Nigerians. If we don’t do that, then we will be destroying ourselves because the PDP has got the last chance to let Nigerians know that they really want to return to power.
“We must present a candidate that will shun tribal, religious sentiments and he must be a candidate that wants to win for the party. The party itself must do all it can to ensure that we have a candidate that wants to win the election for it. If we don’t do that, we will lose grip of the situation and eventually lose the election and that will be very disastrous.
“If the new entrant knows what he wants to get and how to get it, why not? We must not shut the doors against anyone. We must open our doors to those who can make us return to power. If we don’t field a candidate that can win, then we are just wasting our time.”