2023: Osinbajo Informs APC Governors Why He Wants to Run For Presidency 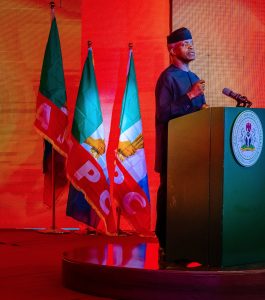 VICE-PRESIDENT Yemi Osinbajo on Sunday night met with a group of governors of the All Progressives Congress (APC), in continuation of his consultation with stakeholders over the declaration for the 2023 presidential race. Last night’s event was followed by a public announcement this morning which he did via various media platforms.

The meeting on Sunday night at his Aguda House, Abuja official residence, was apparently for Muslim Iftar dinner but non-Muslim governors were also in attendance. The iftar dinner was attended by most northern APC governors.

It emerged last week that after the consultations Osinbajo was set to make a public announcement in the next couple of days.

He was expected to use Sunday’s meeting to finetune the move and secure the buy-in of the Progressives Governors’ Forum before the open declaration. Towards this, he has already set up a campaign office in Wuse 2 in the Federal Capital.

The vice president felt the need to apprise the state chief executives of his decision to throw his hat in the ring for the APC presidential ticket, leveraging on his cordial relationship with the governors across parties and regions who he has led as the chairman of the National Economic Council (NEC) in the last seven years.

He is said to be exploiting his good standing with the governors who he had helped their states to obtain loans.

Osinbajo was also said to be looking up to tap into the relationship he had developed with federal agencies where he is chairman and some of the governors are also directors.

A source close to the meeting said practically all the governors have been well disposed to him as the vice president over the years.

Some of the governors at the closed-door meeting included Nasir el-Rufa’i (Kaduna), Dapo Abiodun (Ogun), Hope Uzodimma (Imo), Babajide Sanwo-Olu (Lagos) and Gboyega Oyetola (Osun), who was earlier reported to have travelled to Saudi Arabia.

Besides the governors, Osinbajo has also continued his consultation with other critical party members, including members of the National Assembly.

The meeting with governors came after much speculation over his moves and several pushbacks by his aides and close associates.

His spokesman, Laolu Akande, had rejected reports of the vice president’s impending declaration, often describing them as false and speculative.

It was learnt that Osinbajo has indeed been feeling the pulse of trusted stakeholders and is now convinced that it is time to make an announcement.

Before now, there have been doubts as to whether he would join the race, following the early declaration of the national leader of the APC, Senator Bola Tinubu, who some have said he might not dare by seeking the same ticket.

However, Osinbajo has come under sustained pressure by his supporters who feel that as the incumbent vice president, he should have the right of first refusal over the APC 2023 ticket. Many groups have popped up in states across the country, projecting the vice president as the best man to succeed the President.