Buhari Has Made Nigeria Ungovernable —Tambuwal 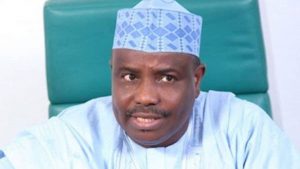 THE governor of Sokoto State, Aminu Tambuwal, has accused President Muhammadu Buhari and his political party, All Progressives Congress (APC) of turning Nigeria into an ungovernable state since they took over power in 2015.

Tambuwal stated this during the inauguration of the New Yenagoa City link bridge and road projects connecting a new Yenagoa City, which already accommodates an 18-hole golf course, polo field and a three-star hotel at Onopa.

Tambuwal, who is also the chairman of the Peoples Democratic Party (PDP) Governors Forum, further said that the current situation in the country makes most Nigerians feel there is no government.

Tambuwal said the government at the centre was being managed as if there was no one in charge of the affairs of the nation, adding that the country under the APC is heading towards the precipice.

The Sokoto State governor, who is one of the presidential aspirants of the PDP, lamented the poor state of affairs of the nation, saying it called for all the leaders of the PDP, patriots and stakeholders to work together to rescue the country from the brinks of collapse. He maintained that the PDP has people with the capacity, experience and managerial skills to steer the ship of the country to safety.

“That is not the situation in Nigeria today. Nigeria is directionless. There are no pilots, there’s no autopilot. Everybody is on his own. Even the government is being run as if there is no one in control.

“That is the reason we have been talking to ourselves in our party and reaching out to other well-meaning patriots to come together to rescue this country and re-build it.

“We are in such a state that we are in distress and we need every hand from within and from our friends. There is insecurity, economic woes, and bad leadership. No state is spared from insecurity. No part of this country is safe and secure at the moment.

“In this present situation in our country, you can’t be talking about investment and development. You have to establish peace before talking about rebuilding the country,” he said