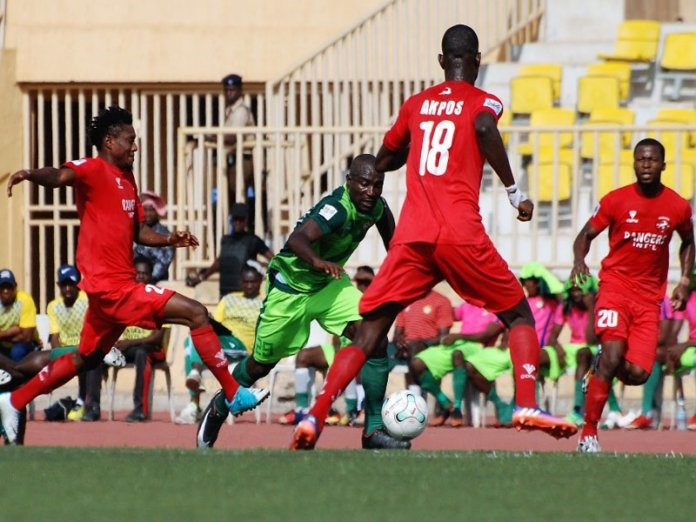 Nine players and four officials of Nigerian Professional Football League (NPFL) side, Kwara United FC of Ilorin are believed to have tested positive for the COVID-19 pandemic ravaging the world.

The 13 players and officials were discovered to have tested positive for the virus on Monday during the mandatory COVID-19 testing ordered by the League Management Company (LMC) for teams in the topflight before resumption of the new 2020/21 NPFL season.

It was further learnt that the management of Kwara United obeyed the LMC directive and ordered all the club’s playing personnel and coaches to take the mandatory test.

“It was after the tests were carried out that nine players and four officials were confirmed to have tested positive for the virus. All those who tested positive have been moved to the Sobi Isolation Centre in Ilorin for treatment,” a top football stakeholders in the state who pleaded anonymity confirmed.

All attempts to reach Chairman of the club, Kunbi Titiloye were unsuccessful.

A club official who spoke on condition of anonymity insisted that nobody was allowed to speak on the result of the Covid-19 tests.

“The only person who can talk is Mr Rafiu Ajakaiye, the Chief Press Secretary to Governor AbdulRahman AbdulRazaq. He is the Spokesperson of the COVID-19 Technical Committee in the state,” observed the source.

The 13 positive cases appear the first known cases in the country’s sports sector.

Just few weeks ago when the Presidential Task Force on COVID-19 lifted lockdown on non-contact sports, most pundits were also looking forward for the return of all football leagues suspended with the outbreak of the pandemic.

But Sports Minister, Sunday Dare, insisted that no sport under his watch would return without proper testing for the virus as well as following the laid down protocol by health officials to prevent the spread of the infection.

“We are happy that the ban on non-contact sports has been lifted after so many months of inactivity due to the Covid-19 scourge . The Sports Ministry is not oblivious of the challenges that would be encountered in organising football matches,” reads a statement signed by the Permanent Secretary of the Sports Ministry, Mr Gabriel Aduda, “We cannot take anything for granted. As a way of safeguarding the lives of our players, coaches, officials and fans, approval must be sought and given before any game is played. The Ministry would ensure that all protocols and guidelines are obeyed as directed by PTF and NCDC,” the statement added