Why Libya’s Stability Matters to Us — Buhari 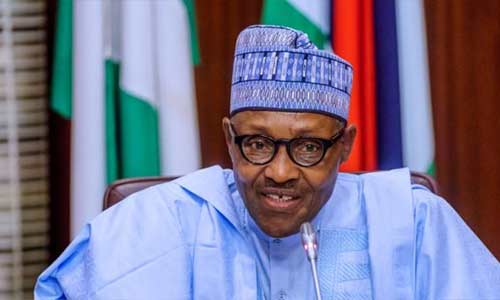 President Muhammadu Buhari says Nigeria is concerned about Libya’s stability because issues affecting the North African nation greatly impact the Lake Chad Basin, which in turn affects Nigeria.
The Nigerian leader said this on Wednesday when he hosted the Chairman, of the Presidential Council of Libya, Mohammed Younis Menfi, in Abuja.
“Republics of Chad, and Niger, have extensive borders with Libya, and they are our immediate neighbours,” Femi Adesina, one of the presidential spokesmen, quoted his principal as saying. “Whatever affects them affects us. The stability or instability of Libya will directly affect us.”
Buhari expressed joy over Menfi’s attendance at the Summit of Lake Chad Basin Commission held on Tuesday to discuss the crisis in Chad and the implications for security in neighbouring nations.
Menfi believes Nigeria and Libya need each other to tackle their common challenges. The Libyan leader who said his country is making progress in the fight against insecurity informed President Buhari that Libya “now has one government, active on the ground”.
“We are expelling the mercenaries, and unifying the instructions,” he stated. According to him, plans are on the way to hold elections in the country.
Nigeria and Libya, he said, share historical relationships especially in the agriculture and oil sectors, and could not ignore each other.
“We aspire for joint cooperation, and reactivation of previous agreements,” Menfi added.
A Region Facing ‘Severe Challenges’
President Buhari had repeatedly linked the renewed crime wave in Nigeria to instability in Libya.
“The problem of herders in Nigeria is a very long historical thing. The Nigerian herders don’t carry anything more than a stick and occasionally a matchet to cut down foliage and give it to their animals. These ones are carrying AK-47,” the 78-year-old said during a meeting with former US President, Donald Trump in 2018.
“So, people should not underrate what happened in Libya. 43 years of Ghaddaffi, people were recruited from the Sahel and trained to shoot and kill. With the demise of Ghaddaffi, they moved to other countries and regions and carried the experience with them.”
Buhari who swept to power on a three-pronged promise which included tackling insecurity and repositioning the country’s economy is also calling for cooperation among nations in the Sahel region in the battle against insecurity.
‘‘Our region is faced with difficult, several challenges that need the support and engagement of all to overcome,” he said on Tuesday at the opening of the Extraordinary Summit of Heads of State and Government of the Lake Chad Basin Commission (LCBC).