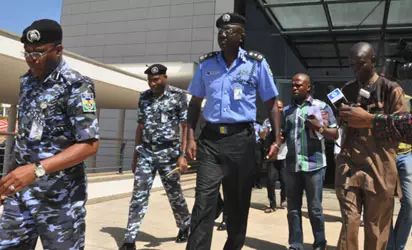 President Goodluck Jonathan on Tuesday, April 21 relieved Suleiman Abba his position as the Inspector-General of Nigeria Police. The IGP’s sack is coming barely nine months into his appointment.

President Jonathan immediately appointed Mr. Solomon Arase to replace Abba as the new acting IGP. Until his appointment, Arase was a Deputy Inspector-General of Police.

No official reason was given for the latest change of guards in the top echelon of the Police Force, except a terse statements released through the twitter (social media) account @abati1990 of the Special Adviser to President Jonathan on Media & Publicity, Dr. Reuben Abati, also announcing Arase as the new acting IGP.

It was, however, gathered that the sacking of Abba, was one of the fall-outs of the just concluded general elections, which President Jonathan and his party, the Peoples Democratic Party, PDP, lost to the All Progressives Congress (APC).  According to sources, that Abba incurred the wrath of the Presidency on the eve of the governorship and House of Assembly elections for allegedly arguing with the government officials over the directive to recall the Assistant Inspector-General of Police in Charge of Zone 6, Tunde Ogunshakin, from Rivers State.

It was gathered that Abba had deployed Ogunshakin from his base in Calabar to Port Harcourt to oversee the governorship election in Rivers State following complaints by Governor Chibuke Amaechi of Rivers State, that the police had collaborated with the Independent National Electoral Commission, INEC, and the PDP to intimidate APC members and rig the presidential and National Assembly elections in the state.

It was further gathered that the sacked police boss reportedly ignored Presidency official’s objection to the deployment of Ogunshakin to Rivers State on the allegation that the police officer was sympathetic to Amaechi and his party and would, therefore, not allow the PDP win the state. Sources in the Presidency  disclosed that that on learning that the IG had defied its order by redeploying Ogunshakin to Rivers State to supervise the governorship elections, the Presidency directed Abba to recall the AIG with immediate effect from Rivers State or face the consequences. The source said the presidency felt slighted when it could not get through to Abba.

Arase is the longest serving Principal Staff Officer (PSO) to IGPs. An award-winning DCP in charge of Panti, Lagos, the new police helmsman also won the FBI and Scotland Yard police award in investigation and intelligence.

Suleiman Abba, 56, is the 17th Nigerian to occupy the exalted Inspector-General of Police position was appointed by President Jonathan on July 31, 2014 but formally took over on August 1. He had declared in his first official statement that he “will do whatever is necessary to bring excessive violent crimes in the country to a halt”.

Known for his vast experience in criminal investigation, intelligence-led policing and crime-fighting operations, Mr. Suleiman’s reign as IGP took a controversial twist soon after when he ordered the withdrawal of policemen attached to the office of the Speaker of House of Representatives, Hon. Aminu Waziri Tambuwal following his defection to the opposition party, the All Progressives Congress (APC).

The order issued through the Force spokesman, Mr Emmanuel Ojukwu, an Acting Commissioner of Police claimed that the withdrawal of Tambuwal’s security was done “having regard to the clear provision of section 68(1)(g) of the 1999 Constitution of the Federal Republic of Nigeria as amended.”

Suleiman later led officers and men of the force to a controversial mission to the National Assembly to prevent pro-APC lawmakers from holding emergency session on November 20, declaring that he did not recognize Tambuwal as the speaker of the House despite not being formally impeached. The police not only locked the entrance gate to the lower chamber of the National Assembly complex, but fired tear gas on desperate APC lawmakers as they approached the rendezvous, and subsequently scaled the fence to gain entrance into the building.

Mr. Abba who hails from Gwaram Local Government Area of Jigawa State holds degrees in History and Law and has attended several management and security courses within and outside Nigeria. He is an alumnus of the National Institute of Policy and Strategic Studies, Kuru, Jos.

With his removal, Mr. Abba will proceed on forced retirement, four years before he attains retirement age. He enlisted in the Nigeria Police as Cadet Inspector on December 31, 1984 and is actually due for retirement on March 22, 2019.