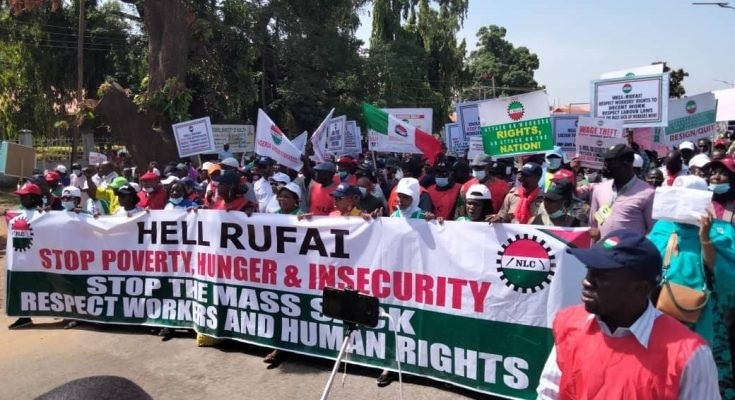 The  five-day warning strike embarked upon by the Nigeria Labour Congress (NLC) in Kaduna State,  to compel Governor Nasir El-Rufai to reverse the recent mass sack of civil servants in the state has paralysed economic and social activities as banks, schools, hospitals, railways and other essential services remained shut.

The state also recorded the second day of blackout on Monday since electricity supply was cut off in the early hours of Sunday. 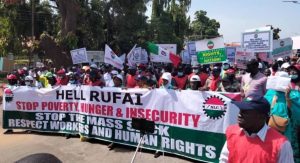 The strike started at 7am on Monday from NLC secretariat in Kaduna with the chanting of solidarity songs and display of placards with various inscriptions.

Enforcement officers of the unions had locked up the gates of Kaduna State secretariat as well as other premises housing civil servants including the Obasanjo House on Monday morning.

The secretariat was later forced open by security agencies even though civil servants, who were caught between the fears of disobeying the government or the labour unions, only loitered about.

Addressing members of the unions at the NLC secretariat, the National President, Comrade Ayuba Wabba, emphasised that there will be no retreat nor surrender by the organised labour to ensure their demands are acceded to by the governor.

“The decision has been communicated to all security agencies of the government. It is the beginning of the struggle of labour and we hope our politicians will cooperate with us to ensure we protect our democracy by delivering its dividends to the citizens including workers,” he said.

According to him: “Organised labour is in Kaduna to tell the world the truth of what the workers, pensioners, students and other citizens in the state are going through besides the lies being peddled by media platforms on El-Rufai’s payroll.” He noted that the situation of the workers in the state is so pathetic that thousands of them have been laid off from their sources of livelihood without the state government making any effort to pay them their entitlements. “Worst still, El-Rufai has gone further to increase school fees in public state school thereby making the children of those sacked from their working place without payment to become dropouts,” he said.

The NLC president lamented that workers in the state were being sacked from their jobs without following due process, adding that no constituted labour union was contacted by Governor El-Rufai before taking the action. “It is only Kaduna State out of the other states in the country that throws workers out of their jobs without any regards for the labour law and that is why we are here,” he said.

However, despite the disruption of social and economic activities by the warning strike, Governor El-Rufai remained adamant. At 1 pm, El-Rufai tweeted that the state’s Executive Council was holding its regular weekly meeting with himself presiding but did not mention the strike action. Later in the day, the state government asked all workers from level 14 and above to resume work or face sanctions.

A statement by the Special Adviser on Media and Communication to the governor, Mr. Muyiwa Adekeye warned that “government is documenting all these violations of the Miscellaneous Offences Act and the Trade Union Act.” He said the Kaduna State Government has noted that the conditions that compelled its decision to right-size its work force have not been altered by the NLC’s “campaign of economic and social sabotage”. He pointed out that government’s resolve “is only reinforced by the desperate actions undertaken by the NLC to unlawful trespass on government facilities, and prevent officers from signing attendance registers.”

He added that the state government intends to continue running its operations in service to the people, despite the futile efforts of the NLC to impede it.