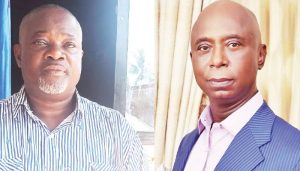 The family of one Okey Ifejoku has accused a Delta State-born billionaire, Ned Nwoko, of being behind the arrest of its breadwinner.

Ifejoku’ daughter, Pamela said her father was arrested by policemen from the state command in March shortly after he was acquitted of a murder charge, which Nwoko allegedly instigated against him and 17 others.

Pamela said the case against her father and the others was as a result of the land that the billionaire wanted to acquire in the Idumuje Ugboko community, where both Okey and Nwoko hail from.

She said the billionaire was initially given some hectares of land by his kinsmen to build a private university, adding that his desire for additional 90 hectares led to a crisis in 2017, during which one Cyprian Kumaorun was killed.

Pamela said, “My father was opposed to more land for Nwoko; but on the day that Kumaorun was killed, he was in Asaba. He was, however, wrongly accused by virtue of his position as the President of the Idumuje Ugboko Development Union. The union opposed giving more land to the billionaire, because he did nothing with what he was given earlier.

“Nwoko immediately caused the police to file charges at the High Court of Delta State against some people, but they were acquitted.

“The police then filed fresh charges against my father and five others in 2020 before the Isele-Uku Magistrates’ Court over the same issue. The charges were sent to the state Director of Public Prosecutions, who advised that the defendants had no case to answer. On the basis of the DPP’s legal advice, the charges were struck out.

“After this, Nwoko moved to Abuja in the same 2020 and got policemen from the Force Criminal Investigation Department to arrest my father and nine other members of the Idumuje Ugboko community. They were detained at the FCID for about six months before they were charged for alleged terrorism and the murder of Kumaorun.”

Pamela said seven of the defendants had been granted bail, while a youth leader in the community, Raymond Omosiete, remained incarcerated, first at the FCID Abuja, and later at the Nigerian Correctional Service centre, Suleja, since November 2020.

Pamela added, “My father spent about five months in the FCID and the Kuje Correctional Centre before his bail conditions could be perfected.

“Seeing that almost all the defendants had been granted bail and that the charges were being exposed for what they are, Ned Nwoko, once again prompted officers of the same FCID Abuja to initiate another round of arrest for the alleged murder of the same Cyprian Kumaorun for which Mr Okey Ifejoku had earlier been discharged by the magistrates’ court in Delta.

“On March 25, 2021, as my father and his co-defendants exited the Abuja court, where they had gone to attend their trial, officers from the FCID Abuja arrested him and his deputy, Mr Godwin Akaba, and kept them for almost a week before they were transferred to the Delta State Police Command, Asaba, where they are still being detained now. The police have not charged him to court and have refused to release him.

“His health condition is poor; he’s not as strong as he used to be. He has diabetes and mild hypertension. Please, all I want is justice for my father. He should not suffer for an offence he did not commit.”

Nwoko’s spokesperson, Mr Adeniyi Ifetayo, said Okey and the others should prove their innocence in court.

Ifetayo stated, “The problem started when Ned applied for the land and he went to the community’s council. The land doesn’t belong to one family and compensation is usually paid, which Ned (Nwoko) did.

“He actually paid compensation worth over N200m to the community. He wanted to build a university and a golf course. He told them in the agreement signed with the late Obi Abat Nwoko that 40 per cent of the university, that is the STAR University, would belong to the community.”

Ifetayo explained that about 80 per cent of the university had been completed, adding that Nwoko paid for the land and lawfully obtained the Certificate of Occupancy.

He said when the late Obi died, one of his sons, Nonso Nwoko, came from Lagos and opposed the project.

He said following Nwoko’s advice, the matter was reported to the police, adding that the National Human Rights Commission was involved in the case.

Ifetayo added, “The case is still in court. If they claim they are innocent then let them prove it. It’s as simple as that.

“For the record, Ned Nwoko is neither a complainant nor defendant in this matter. He doesn’t have anything to do with them. He is a man of justice and any negative publicity will fail.”

When the Public Relations Officer of the Delta State Police Command, Edafe Bright, was contacted, he simply said, “I am not the person in charge of the matter.”

A policeman in Abuja confirmed that the FCID was handling the matter. However, the Force spokesman, Frank Mba, neither picked calls to his phone nor replied to text messages sent to him.