US Open: Pliskova qualifies for 2nd round 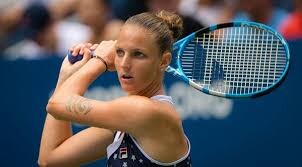 Top seed Karolina Pliskova made a confident start to her US Open campaign with a 6-4 6-0 win over Ukraine’s Anhelina Kalinina in New York.

The Czech, 28, recovered from dropping serve in the first game to later string together eight games in a row, needing just 21 minutes to take the second set.

Pliskova, top-ranked in the absence of Ashleigh Barty and Simona Halep, faces France’s Caroline Garcia next. Also through are ex-Wimbledon champions Petra Kvitova and Angelique Kerber.

Other women in action on day one at Flushing Meadows – where the tournament is being held behind closed doors – include Japan’s 2018 champion Naomi Osaka and American teenager Coco Gauff.