Two die as customs, soldiers clash with smugglers in Ogun 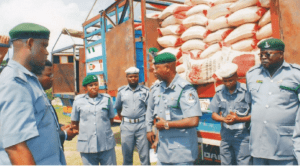 Pandemonium broke out on Thursday when men of the Nigeria Customs Service and soldiers clashed with suspected smugglers, leaving two persons dead and 10 others injured.

It was gathered that the clash occurred at Oja-Odan in the Yewa North Local Government of the state when a patrol team from Ogun Command Area I intercepted 320 bags of foreign parboiled rice (50kg) stockpiled in a building.

It was gathered that during the evacuation of the goods, some ‘diehard’ smugglers in collaboration with hoodlums reportedly opened fire on the patrol team.

Four customs men, one soldier and five civilians assisting in the evacuation reportedly sustained gunshot injuries during the attack.

It was learnt that the patrol team, in reprisal, also shot dead two of the suspected smugglers and left many others with gunshot injuries.

The spokesman for the Command, Hammed Oloyede, confirmed the incident on Friday.

Oloyede said those injured had been taken to a hospital for “proper medical attention and are currently responding to treatment.”

According to him, the patrol team succeeded in evacuating the items, arrested one suspect, Taiye Kujo, and six motorcycles used by the suspected smugglers.

He said, “An investigation is ongoing to fish out more perpetrators of this barbaric act. In this regard, the Customs Area Controller, Comptroller Peter Kolo assured the general public that the renewed hostilities by armed smugglers will not deter our officers and men from discharging their statutory responsibilities. He further appealed to the traditional rulers and community leaders to warn their subjects to desist from smuggling activities and attack on security operative as anyone caught shall be made to face the wrath of the law.”