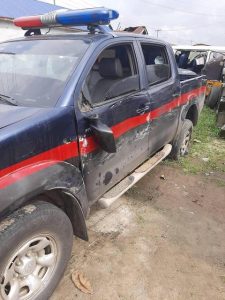 The Rivers State Police Command has confirmed the death of seven of its cops by gunmen who attacked police stations in Elimgbu, Obio/Akpor and Rumuji, Emuoha Local Government Areas of the state respectively on Friday night.

The gunmen also lost two of their gang members after policemen engaged them in a shootout and prevented them from gaining access to one of the police stations.

The State Commissioner of Police, Eboka Friday, confirmed the attacks and killings in a statement by the command’s spokesman, Nnamdi Omoni, on Saturday.

The statement read, “The Rivers State Police Command can confirm the unprovoked and mindless attack on policemen and vehicles. The incident which led to the death of seven policemen occurred last night around 8.30pm, where unknown gunmen driven in two branded Hilux vans, attacked the special checkpoint at Choba bridge (near Port Harcourt), killed two policemen on duty and set ablaze a private car belonging to one of the policemen.

“A similar attack was launched on Rumuji Police Station (Emuoha LGA) by the same hoodlums who killed two policemen on duty and burnt a police patrol vehicle. However, a stiff resistance by the police prevented the hoodlums from gaining access into the police station. In the course of exchange of fire, two of the attackers were fatally wounded and died on the spot.

“The third attack at Elimgbu Police Station (Obio/Akpor LGA) was equally resisted by the Police, though three officers were killed in that attack but the serious fire engagement made them to abandon their bullet riddled Hilux van, while they escaped with various degrees of gunshot wounds with a snatched Sienna bus.

“It is pertinent to note that in all three attacks carried out last night, no police station/formation was burnt. Regrettably, a total of five assault rifles were lost in the incident.”