Twitter May Limit Letting Users Tweets to ‘Trusted Friends’ Only 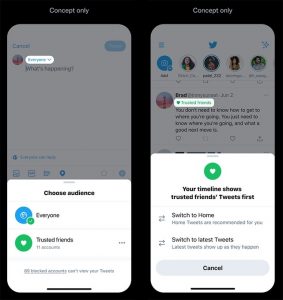 The new “Trusted Friends” would allow users to limit the audience for select tweets to a small circle of “close friends”. Another new feature, called “Facets” is aimed at allowing users to categorize their tweets when they send them. Finally, the service is also considering letting users list certain phrases that they’d rather not see in their replies. Twitter says that the ideas for the features are currently in active development.

Many users of the social media service already have multiple accounts to separate their work and personal lives – often these personal accounts are made private to prevent the sharing of personal information too publicly. Features like Trusted Friends and Facets can be the key to allowing similar functionality from a single account.

Trusted Friends is set to offer a toggle to let users signify that a tweet should be public or only for friends (similar to the “close friends” feature on Instagram).

Facets is set to offer even more control, theoretically letting users sort their tweets into professional and personal categories, and also sorting tweets into specific hobbies or interests they may have. Facets could let users follow only select tweets from an account. Twitter says that the plan is for users to be able to follow someone just for their tweets on a certain topic, rather than having to follow their account as a whole.

The Verge reports that the final new features proposed by Twitter would let users specify which phrases they would like to not see in replies to their tweets.

Followers would then see these phrases highlighted, alongside a warning to not use this language. These features, Twitter cautions, aren’t actively being built. Instead, the company hopes that as users tweet more about the new features, it can gather feedback about how users feel about the features while they’re still in early development.