Tributes Pour in for Late COAS, Attahiru, Others 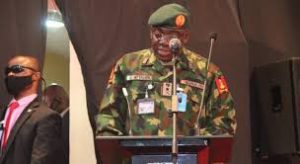 An avalanche of tributes were paid to former Chief of Army Staff, Lieutenant General Ibrahim Attahiru and ten others who died in an air crash in Kaduna on Friday. According to an army statement confirming the death, the ex-COAS was en-route Kaduna from Abuja when the unfortunate incident happened.

“The Nigerian Army regrets to announce the passing away of its Chief of Army Staff, Lt Gen Ibrahim Attahiru,” the statement, signed by army spokesman, Brigadier-General Ibrahim Yerima, said.

“The sad event occurred following an air crash in Kaduna which also claimed the lives of 10 other officers including the crew.”

In his response to the incident, President Muhammadu Buhari said he was sad and sorrowful.

“President Muhammadu Buhari is deeply saddened over the air crash that claimed the Chief of Army Staff, Lt. Gen. Ibrahim Attahiru, and other military officers,” a statement signed by presidential spokesman, Femi Adesina, said. President Buhari described the military officers as “heroes who paid the ultimate price for peace and security in the land.”

He also noted that the crash “is one mortal blow to our underbelly, at a time our armed forces are poised to end the security challenges facing the country.” According to the statement, Buhari pledged that the departed would not die in vain.

The Speaker of the House of Representatives, Femi Gbajabiamila, said the death of the Army Chief was unfortunate coming at a time that the Nigerian military was finding solutions to the security challenges in the country.

In a statement signed by his spokesperson, Lanre Lasisi, Gbajabiamila said having taken over from the immediate past Chief of Army Staff, Lieutenant General Tukur Buratai, a couple of months ago, Attahiru has shown a lot of commitment in tackling the security situation in the country.

Gbajabiamila, who said he had a few meetings with Attahiru in search of solutions to the challenges, noted that the late Army Chief came across as a core professional officer.

He said the Nigerian military, especially the Nigeria Army, has lost a dedicated and committed senior officer whose services to fatherland will be sorely missed.

The Northern Governors Forum, in a statement signed by the office of its Chairman and Governor of Plateau State, Simon Lalong, said it was distressed over the sad incident.

Lalong said this is another sad day in the history of the nation as it has lost patriotic Nigerians who gave their lives to the defence of the territorial integrity of the country, and also ensuring that its citizens live in peace and security.

“Lt. Gen. Ibrahim Attahiru was a committed soldier whose passion for defending Nigeria was very clear throughout his military career even before his appointment as the Chief of Army Staff,” he said.

“Since his appointment, we have engaged him as Northern Governors Forum and individually as Governors towards enhancing the security and safety of our States, region and the nation at large.

“Within the few months he held sway, we have seen improvements and high resolve to bringing an end to insurgency, banditry, kidnapping and other criminal activities.

“We had been working on consolidating this before this tragic incident that took his life and that of others working with him. We are highly shocked and pained.”

Lalong while condoling with the the President and Commander in Chief Muhammadu Buhari, the Nigerian Army, families of the deceased officers and men, as well as the entire Nigerian Armed Forces said the sad event is deeply regrettable but should not deter the Armed Forces from giving their best in the service of the nation just as the deceased COAS, officers and men did before their tragic death. He prayed God to grant the deceased eternal rest and comfort their families.

Niger State Governor and Chairman of the North Central States Governors’ Forum, Abubakar Bello, said the death was devastating to the nation at its trying moment of insecurity. Governor Sani Bello disclosed this in a statement signed by his spokesperson, Mary Noel-Berje.

He said the death of COAS and others was coming at a time when the newly appointed Chief of Army Staff along with other Service Chiefs have developed renewed efforts in tackling insecurity in the country.

The Governor said the late Chief of Army Staff has, within his short time in the office, demonstrated and showed remarkable commitment and professionalism in the course of discharging his duty.

He called on the family, the Nigerian Army, friends and associates to accept the death as the will of Allah and bear the irreparable loss.

The Governor enjoined all to pray for the repose of his soul and other officers, and for Allah to give their families the strength to accept their divine call as all souls shall taste death.

The Attorney-General of the Federation and Minister of Justice, Abubakar Malami, SAN described the crash and deaths as a national tragedy. Malami received the news of the crash of the military aircraft in Kano while attending to guests in preparation for the wedding ceremony of his second son, Abiru Rahman Malami billed for tomorrow, according to a statement from his media office.

He described the Late Chief of Army Staff, Lt. General Ibrahim Attahiru and members of his team as dedicated patriotic Nigerians whose efforts to improve the security situation of the country was manifest.

Malami prayed Allah to grant eternal salvation for all that lost their lives in the air mishap.
He also prayed that the family members have the fortitude to bear the loss. The Minister said the late Army Officer who died in active service to the nation will always be remembered as a selfless and patriotic Nigerian who is passionate in duty.

In his reaction to the disaster, Kaduna State Governor, Nasir El-Rufai, said Lt.Gen. Attahiru was a shining star whose sudden death has robbed Nigeria of an officer striving to bring new drive to secure the country against terrorists and other threats to national security, according to a statement signed by the state’s Commissioner of Internal Security and Home Affairs, Samuel Aruwan.

“The Governor said the news of General Attahiru’s death has left him deeply shaken, with a sense of great personal loss, coming so soon after his appointment had brought immense pride and a sense of hope to the people of Kaduna State,” the statement said.

“Governor El-Rufai on behalf of the Government and People of Kaduna State, has extended his condolences to President Muhammadu Buhari, all branches of the military, especially the Nigerian Army, and the family of General Attahiru, as well as the families of all the officers who have lost their lives in this national tragedy.

“He prayed to Allah to forgive their shortcomings and grant them eternal rest, and comfort their families as the nation, grapples with this colossal and very painful loss.”