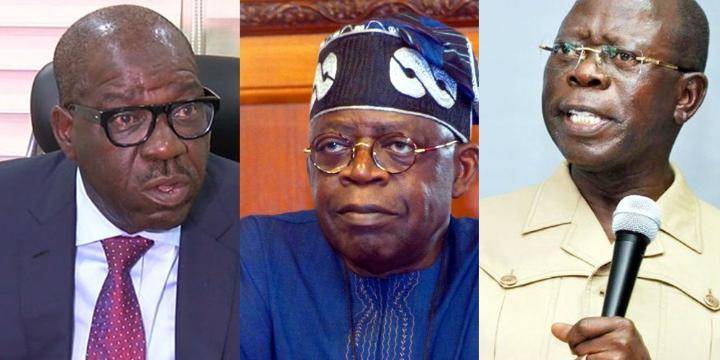 Still basking in the euphoria of his last Saturday’s victory in the Edo State governorship election, Governor Godwin Obaseki yesterday came out smoking, dismissing the National Leader of the All Progressives Congress (APC), Senator Bola Tinubu, and the party’s former National Chairman, Mr. Adams Oshiomhole, as extra-constitutional players in the polity.

He warned that if their activities remained unchecked, they would become a danger to the development of democracy in the country.

”For us the challenge with people like Oshiomhole, Tinubu and others is that they pose a great danger to our democracy; they are extra-constitutional players,” he told ARISE NEWS Channel,  the broadcast arm of THISDAY newspaper in its flagship programme, The Morning Show, explaining. According to the reelected governor, “the duo constitute themselves into what they say they are; they try to overlap themselves over people who have constitutional authority, and if we allow them to continue, they will destroy our democracy.”

However, later in the day when he and his deputy, Hon. Philip Shaibu, went to pick up their certificates of return, he mellowed down, offering an olive branch to Oshiomhole and his main challenger in the contest, Pastor Osagie Ize-Iyamu.

“I’m using this opportunity to extend the hand of fellowship to my brother, Pastor Osagie Ize-Iyamu, and his other colleagues in the All Progressives Congress to join us and work with us so that we can move Edo forward.

“On a specific note, I want to use this occasion to call on the former chairman of the APC, [Mr.] Adams Oshiomhole, that the fight is over and he should come and join in building the house, where he was part of laying the foundation,” he said in a speech after collecting his certificate from the Independent National Elector an Commission National Commissioner, Mrs. May Agbamuche-Mbu.

Obaseki had told ARISE NEWS Channel that while he was ready to embrace Ize-Iyamu, he would be circumspect about Oshiomhole.

He said Oshiomhole, Tinubu, and others are threats to democracy in Nigeria, adding that they cannot sit in the comfort of their houses and determine who becomes what and who gets into what office.

He explained: ”Certainly, but for someone like comrade Adams Oshiomhole, I wouldn’t want to say much here but clearly when you find that you’ve been deceived, we don’t share the same values or trust at all, it is his responsibility to build back those trust and to build back trust. As we say in Edo State everybody should low maintain their lane, as whatever he is and I will maintain mine.

”For us the challenge with people like Oshiomhole, Tinubu and others is that they pose a great danger to our democracy; they are extra-constitutional players; they constituted themselves into what they say they are; they try to overlap themselves over people who have constitutional authority and if we allow them to continue, they will destroy our democracy. For me it’s straight forward, it’s not a personal issue but about their role in our democracy.”

He explained further: ”You cannot have people who are guided by the constitution in office and people who don’t have such mandate or authority or any checks on their conduct come and say they want to control people who have been properly constituted in office.

“Oshiomhole and Tinubu are non-constitutional actors. They cannot sit in the comfort of their houses or wherever they are and determine who becomes what and who gets into what office. It’s very anti-democratic.”

The governor vowed to fight Oshiomhole if he continues to create trouble in the state.

Responding to a question on his threat during his re-election campaign to drive Oshiomhole out of Edo State if he was re-elected, the governor declared that he had no such intentions.

He, however, added that if the former governor continues to be destructive, and create problems for the Edo people, then he will show no mercy, insisting that it is totally up to Oshiomhole to decide what to do.

Speaking on Ize-Iyamu’s silence since his victory and if he will accept President Muhammadu Buhari’s advice on being magnanimous, Obaseki expressed his willingness to be magnanimous with Ize-Iyamu if he comes through.

He said that he has no issues with Ize-Iyamu, adding that the problems are factors outside of him, which are the people who lured him into the governorship contest.

According to him, ”This is not the first time I’m contesting with Pastor Ize-Iyamu; we have a family relationship; he is a pastor and I go to church. We cannot live a life of acrimony or hate; he played his politics on how he knows how to and I did mine. I will be magnanimous if he comes through; we will have the conversation; there’s enough room for us to have such a conversation. I don’t think the problem is Pastor Ize-Iyamu, I know him. I think the problems are factors outside of him – the people who lured him into the contest. I’m sure they are the same ones who are trying to fester the acrimony.

”So, between us, there are no issues. The day he calls or makes up his mind on what to do moving forward, I’m sure we will be able to have that conversation.

But there are people who work with him that know what they have done and have been very vicious and evil. I will be surprised if they have the courage to even come up and seek reconciliation.”

Asked if he will consider returning to APC, the governor said that will be immoral of him, hence he has no plans to return to his former party.

His words: ”At this point in time I have been elected on a platform of the People’s Democratic Party (PDP) and I have made promises to the people of Edo State; It’s not about me, I won the election on the platform of PDP, it will be immoral and unfair of me to have any other consideration at this point about leaving the platform that gave me the mandate, and there must be morals in politics, and at this point in time, I don’t think it’s right to jettison the platform, particularly when I have no issues with the party.”

When asked of his views about, his deputy governor, the Governor of River State, Chief Nyesom Wike, and others who stood by him, Obaseki said, ”My deputy governor and I share the same values, that’s why through thick and thin, he was there for me. For him it’s not about money, it’s about belief, truth, honesty, and human values. You don’t have to be a crook, a fox to be a politician. You can be a noble and straightforward person and still be a politician.

”On Wike, if he’s not convinced about a situation or an idea, there’s no way you can bully him about it, but once he’s convinced and believes in you, he will put everything into supporting what he believes in. He’s a very committed person, he’s committed to PDP and he’s also a very supportive and considerate person.

He’s fearless, if he believes in a cause he will fight for it, you can’t cower him. It’s not true that he didn’t support me. When I was first disqualified he was one of the first people, I went to in Port-Harcourt and he advised on what to do, all that time we were going back and forth, he was going to make sure that certain issues were cleared so that to avoid challenges in the future and I am glad he did.”

On bringing down the rate of unemployment in Edo State, he said, ”In case of unemployment we believe that we moved the figures down considerably because the strategy was to create the environment for investment and businesses to thrive.

We can continue to ensure that the underlying things, structures that every society needs for growth to exist, we’ve identified those areas, manufacturing, agriculture, healthcare, entertainment, technology and so on that we will be working with a lot of people to ensure that.”

He said he would not have any ambition to go into Senate after his tenure, rather he would go to teach.

”I want to go back and impact knowledge, I have been an effective governor,” he said.

At the certificate of return handing over ceremony, he called on his opponents and predecessor to join him in the task of rebuilding the state.

Obaseki said: “To our friends and our brothers on the other side of the divide, we are one family in the pursuit to provide services and the public good for our citizens.

“We have no malice, the only thing we disagreed on was in the approach in moving Edo forward.”