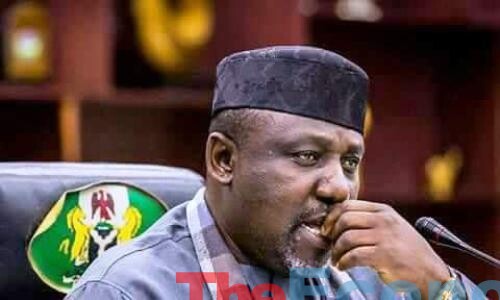 The former Governor of Imo State, Senator Rochas Okorocha, has stated that the All Progressives Congress (APC) is still surviving because of the respect the party stalwarts have for President Muhammadu Buhari. Okorocha, who spoke with select journalists in Abuja warned that unless the party goes back to the four pillars that formed the APC, namely the Action Congress of Nigeria (ACN), the Congress for Progressive Change (CPC), the All Progressives Grand Alliance (APGA) and the All Nigeria People Party (ANPP), the party will continue to struggle.

The senator lauded the Edo masses for once again demonstrating people’s power as against the dictates of a few, noting that anything that’s founded on injustice will not survive. According to him, if the APC does not right the wrongs done by the Adams Oshiomhole-led executive that was recently dissolved; the party will continue to grope in the dark.

“ That’s the only thing that is keeping the APC, if not that, I don’t think there is anything like APC because people are beginning to get fed up. Again, PDP is not even better, the party has its own challenges” he said.

While recalling the formative years of APC, he explained that the CPC was led by Buhari, ACN led by Ahmed Tinubu, ANPP headed by Ogbonnaya Onu while APGA led by him, brought in its structure. “Every other person fell into this structure. The PDP group came in and joined us. I gave the name APC, I designed that logo and that was the beginning of the party and we had understanding.

“That is the party you call APC and unless we go back to where it all started, APC can never see the light of the day and that was how we started and that was what brought President Muhammadu Buhari to office,” he noted.

“ And we shared the first positions equally among these four parties. Now the founding fathers of the party are relegated to the background and people are coming with different interests, making us play the same kind of politics that PDP played” the former governor argued.

On 2023, Okorocha insisted that the major criterion for who should govern Nigeria after Buhari, should be the person’s capacity and not necessarily where the person comes from, saying that those who have nothing to offer should stay away from showing interest. Okorocha described APC’s loss in Edo as a masses’ revolution against injustice, saying that he had warned several times of the danger of allowing dictatorial tendencies and intentional injustices to prevail.

He said: “When injustice comes into a matter, the centre can no longer hold and that is the problem of the party. I forewarned about what is happening today in our party. And it means we don’t have APC in the South South, that is a bad sign. “In the southeast, literally we can say we don’t have APC, we just managed through the ‘Ben Johnson’ way to get one state and that does not make our image good.

“The same party under the leadership of the president, a man we consider a clean man, an honest man, a patriotic man and these are happening, that means it is unfortunate.

“The people that voted for Godwin Obaseki are not only PDP, even people in the APC voted for him. They want to stand up against injustice, Edo people are not docile, they know what they want and how they want it,” he said.”