There are Good, Bad and Ugly Bandits, Says Sheikh Gumi 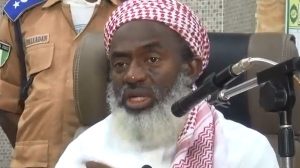 Sheikh Ahmad Gumi, a prominent Islamic cleric, has revealed that there are different splinter groups of bandits which can be used against one another in the struggle to end abduction of school pupils.

Speaking to The Punch over the abduction of about 200 children in the Rafi Local Government Area of Niger State, Gumi advised the Federal Government to use the bad bandits to fight the ugly ones and then the good to fight the bad.

“We are always trying to do our best, but you see, you need two hands to shake. You know these people (bandits) need engagements from the government itself. If you dialogue with them without involvement of the government, it is a problem,” he said.

“All these agitations you see, if the government can do a splinter group and the splinter group is empowered, every man wants power and money, they will do your job. There are many ready to submit themselves. All the ones you see me meeting in the bush, they are all telling us, ‘we are ready.’’’

Gumi, a former Army captain, has carved a niche for himself as a middleman between the government and bandits, some of whom he has visited in their forest hideouts.

Parents of the 27 students abducted from the Federal College of Forestry Mechanisation, Afaka, Kaduna State, in March, paid him a ‘thank you’ visit for his role in the release of the students.

Gumi, who was also involved in the negotiations for the release of the students of Greenfield University kidnapped in April, has, however, stirred multiple controversies among Nigerians with his pro-bandits views.

In March, he compared bandits to coup plotters during military regimes and asked that they be granted amnesty.