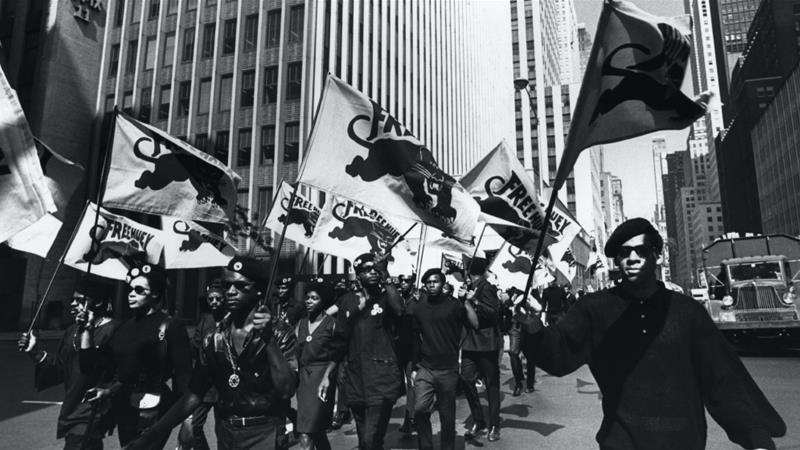 Although often ignored ideologically, the iconography of Black Power continues to be circulated in popular culture – without a thorough engagement with the politics that led to its creation. The glamorisation of Black Power imagery is a phenomenon that stretches as far back as the 1960s. However, with the resurgence of the Black Lives Matter movement, it is time that we move beyond our obsession with revolutionary aesthetics and engage with its politics.

In recent weeks, artists Ciara and Teyana Taylor have posted images of themselves on Instagram wearing Black Power-inspired costumes, replicating a 1968 photograph of Black Panther Party (BPP) co-founder Huey P Newton that showed him sitting on a wicker chair wearing the party’s outfit. Both artists were dressed in all-black leather with black sunglasses to match – the only difference being Taylor’s beret and rifle. Despite Ciara and Taylor using their images as symbols of Black pride, they failed to recognise or critically engage with the history and ideology of Black Power.

Formed in 1966, by Newton and Bobby Seale, the BPP was a revolutionary self-defence organisation formed to safeguard the Black community from police brutality and America’s ubiquitous racism. Members of the party quickly assumed a uniform, which included black leather jackets, black trousers, black berets and black sunglasses. This outfit was adopted due to its militant appearance and its similarity to those worn by revolutionaries such as Che Guevara and Fidel Castro.

As frequently expressed in its organisational newspaper, Black Panther, the BPP believed in Black self-defence, self-reliance and self-determination. The organisation placed itself in opposition to white imperial capitalism, which it saw as the cause of societal inequality and racial brutality. Despite communicating their objectives through traditional political avenues such as demonstrations and manifestos, the Panthers were aware of the political uses of imagery and fashion.

The iconic black uniform served as a visual representation of the organisation’s objectives and principles, as it not only presented the BPP as militant, powerful and revolutionary, but it also gave them visibility at a time when the Black community often felt ignored. Such clothing also served as cultural capital within Black radical circles as it affirmed one’s refusal to assimilate within the dominant white culture. Party members, identifiable by their distinct outfits, were frightening to many white Americans, as the authorities deceptively began presenting Black Power advocates as dangerous and violent extremists.

Black Power iconography was not only about clothing but also the natural afro hairstyle. The afro became a symbol of the 1960s’ “Black is beautiful” cultural movement. It expressed pride in one’s African features and challenged social norms which largely pressured Black women to conform to Western beauty standards by straightening their hair. During this era, young men and women began wearing their afro despite pushback from those in mainstream society and even some conservative members of the Black community.

Black American radical Angela Davis became the embodiment of Black Power after the FBI issued a search warrant for her, falsely charging her with conspiracy to murder. While hiding from the authorities, Davis became a recognisable figure as a mugshot of her wearing her afro was broadcast not only in the US but internationally. In the eyes of the state, Davis represented violent radicalism, but for many in the Black community, she became a heroine and a representation of Black Power in action.

In the aftermath of her acquittal, Davis became a revolutionary style icon and, consequently, her image was reproduced as a fashion symbol within radical and mainstream circles. This, as Davis criticised in a 1994 essay, was a disturbing exploitation of her image which erased her radical politics from popular discourse. She noted that there was a “danger that this historical memory may become ahistorical and apolitical”.

Despite her protestations in the 1990s, images of Davis and her afro continue to be co-opted and manipulated today, with fashion label Prada producing a $500 t-shirt, in 2018, with an illustration of Davis shouting “Right On!”. Similarly, the British government chose to use images of Davis in their controversial counter-radicalisation campaign, Prevent. The irony of an anti-capitalist and communist being selected on both these occasions appears to have been lost on the organisations.

Glamorising Black Power images not only erases the radical politics of the movement, but also leads to a sanitised and inaccurate retelling of the past. Romanticising Black Power icons and their aesthetics without critically engaging with the reality of this history often results in a narrative that only recognises the successes of the movement and overlooks the lasting pain and trauma of that generation of Black radicals.

In recent interviews, American former Black Panther Denise Oliver-Velez and her British counterpart Beverley Bryan spoke to me about the harsh realities of the Black Power movement. Bryan spoke candidly about the many young people who became “casualties of the movement” and were subsequently left “broken”. Likewise, Oliver-Velez raised awareness of the older “brothers” who are still being incarcerated for their involvement in Black radical politics.

Instead of merely focusing on Black Power visuals or nostalgically fawning over its fashion, people should explore the ideologies that underpinned the movement, such as anti-capitalism, anti-imperialism and pan-African solidarity. Such ideas helped form an international movement and provided radical alternatives to the pre-existing systems. The Panthers succeeded in raising Black consciousness, challenging police racism and bringing Black struggles to the forefront of political discourse.

However, despite these gains, Black communities around the world are faced with similar issues of institutional racism, police brutality and societal marginalisation. Only through serious engagement with the radical politics of Black Power will we be able to draw on our revolutionary predecessors and come up with creative solutions for our current struggles. It is time we focused on politics and not just spectacle.

Bryan Knight is a London-based journalist and oral historian. He hosts the Tell A Friend podcast.