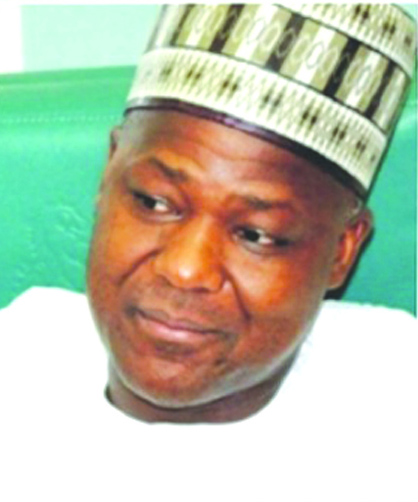 Fresh corruption saga rocks the House of Representatives following allegations by Abdulmumin Jibrin, erstwhile chairman of the House Committee on Appropriation that principal officers of the green chamber tried to inject about N40 billion into 2016 Budget for personal gains, writes Olisemeka Obeche

The House of Representatives is embroiled in a corruption saga following recent allegation by Abdulmumin Jibrin, erstwhile chairman of the House Committee on Appropriation that the Speaker, Yakubu Dogara and a few principal officers tried unsuccessfully to inject about N40 billion into the 2016 Budget for their personal interests.

Jibrin, lawmaker representing Kiru/Bebeji Federal Constituency of Kano State, made the revelation on July 21, following his controversial removal as chairman of the House Committee on Appropriation. Jibrin, a former political ally of Dogara, claimed in a statement that his objection to the budget padding by the speaker and his clique culminated in his being forced to quit as committee chairman. He therefore called for the resignation of the principal officers of the House for their alleged ignoble role in the budget padding saga. “Lately, I openly disagreed with some principal officers (Speaker Dogara, Deputy Speaker Lasun, Whip Doguwa and Minority Leader, Leo Ogor) on the issue of immunity for lawmakers and budget issues. These principal officers were not comfortable with my independent disposition and my refusal to cover up their unilateral decision to allocate to themselves N40 billion out of the N100 billion allocated to the entire National Assembly,” Jibrin said.

According to the embattled lawmaker, his frosty relationship with Dogara started soon after he refused to grant his (Dogara’s) personal request of injecting N30 billion into the budget in the guise of constituency projects. “My inability to admit into the budget almost N30 billion personal requests from Mr Speaker and the three other principal officers also became an issue. I have (every) documented evidence to this effect,” he claimed, stressing that since it became obvious that he would not  pander to their whims and caprices, Dogara began to checkmate him. “Since after that meeting, Mr Speaker with the support of the three other principal officers effectively blocked me from briefing members, ensured I was not at the last executive session and refused to investigate issues I raised that I believe must be addressed if we intend to build a better budget system for the House,” he said, adding “I did nothing wrong.”

Jibrin also described the speaker as a ‘petty and narrow-minded’ leader as well as a political back-stabber.
The embattled lawmaker vowed to expose the treachery of the Dogara leadership and prove why they were not worthy to remain in power. “I intend to explore all internal avenues of the House to brief my colleagues in detail and testify against Speaker Dogara, Deputy Lasun, Whip Doguwa and Minority Leader Leo Ogor on why they should resign. If I am not allowed to exercise my privilege, I shall consider legal options. I can no longer bear the brunt of abuses and baseless allegations keeping quiet all in the name of “confidentiality” expected of an appropriation chairman,” he said.

House leadership defence
Expectedly, leadership of the House of Representatives has dismissed Jibrin’s corruption allegation as fabricated lies designed to smear those responsible for his removal as chairman of House Committee of Appropriation. “Most of the allegations on the 2016 budget process and his opposition to immunity of presiding officers are non-issues and mere after-thought manufactured simply because the House relieved him of his position. If he had all these ‘facts’ before, why didn’t he make them public? Why is he doing that now,” Abdulrazak Namdas, spokesman of the House said.
According to him, the removal of Jibrin as head, House Committee on Appropriation followed legislative processes that should not have warranted such mudslinging response.

On his part, Dogara described Jibrin’s allegations as a huge joke. According to him, the former Chairman of the House Committee on Appropriation was relieved of his duties because of his growing political exuberance. “He threatened heavens will come down if he is removed and we thought to ourselves, it will be fun watching it happen. We are waiting for heavens to come down first. That will be a lifetime experience. Until that happens, it’s all jokes. And I won’t respond to jokes. I am not a mud wrestler,” Dogara declared, stressing that the matter would be tackled through legislative platforms not in the media.

House Minority Leader, Leo Ogor and one of the principal officers mentioned in the alleged budget padding scam, also denied the allegations. But Ogor said he would not provide details on their defence until resumption from legislative recess. “At the appropriate time, when we resume on the floor, we will speak. But I can assure you that they (corruption allegations made by Jibrin against principal officers) are all bunch of lies and there is nothing to it,” he said. Accrding to him, Jibrin decided to throw mud-dirt at them because he lost his plum position in the House. “You can read the lines; he has actually lost his committee (leadership) and I believe that is the issue. How come he was the one that addressed the issue of this budget, accused the Presidency and the Executive in respect of issues that bother on the budget. Today, he is singing a different tune; and I think he is good at singing different tunes,” Ogor said.