The APC Has Failed in its Promises— Odigie Oyegun 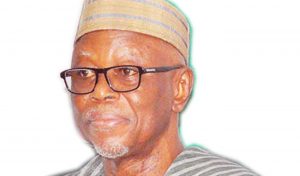 Former national Chairman of the All Progressives Congress, Chief Odigie Oyegun has condemned the stakeholders in the ruling party over the  indifference towards the devolution of power they  promised Nigerians while  the party was the main  opposition platform in the country.

Chief Oyegun expressed his disappointment at the weekend  in Abuja during the public presentation of a book,  “APC Litmus Test: Nigerian Democracy and Politics of Change,”  authored by the Director General of the Progressive Governors Forum, Salihu Lukman.

The former APC Chairman recalled that the effort of the party National Working Committee  under his leadership to ensure that the party redeem its pledge  to carry out restructuring of the nation political architecture while unveiling its blueprint on March 6, 2014 was frustrated.

It could be recalled that the Chief Oyegun led APC NWC had in August 2017,  inaugurated  a True Federalism committee led by Kaduna State governor, Mallam Nasir El-Rufai and  Senator Olubunmi Adetumbi as secretary.

The Committee in its report which it submitted in January 2018,  recommended state police, increase in revenue allocation to states and derivation principle amongst others.

Chief Oyegun told the gathering which included President of the Senate, Ahmad Lawan; acting national chairman of the party and Yobe state governor, Mai Mala Buni, his Kebbi State counterpart, Abubakar Atiku Bagudu, amongst others that the report of the Committee was submitted to  the relevant statutory organs of the party and the Presidency but no action was taken.

He expressed regret that the failure to take the agitation for restructuring seriously has led to the proliferation of movements for the balkanization of the country.

He said:”Let me refer to just one aspect of what the Governor said. That is the document on true federalism which the party put together that passed through all the organs of the party:  the National Working Committee, the national Caucus, the National Executive Committee.

“Why did we do it at that time? We did it because like, it is happening today, there was this cacophony of voices. Two people in party could not agree on what they meant by restructuring. So the party needed to take control of the debate, define, the issues, proffer solutions and went so far as to have some drafts legislation.

” It is not by any chance a perfect document. But it reflects then the thinking and the desires of the Nigerian people. Everybody kept quiet after we brought that document out, publicized it, held press conferences over it and most Nigerians were very, very happy. But once again, we did not make the kind of progress that we could have made and it has become once more, the topical subject in the Nigerian polity.

“Unfortunately, it has become the topic again and we now have people wanting to disengage from the federation, which did not happen before and that is a warning sign. If a child asks for garri today you don’t give him, tomorrow he may decide it  is cake he wants.

“We shouldn’t as the government of the federation gives the impression that only military governments can fundamentally tamper with the basic structure of this nation.

“We are in charge today, a progressive government, a progressive regime and I think it is proper that we show to the nation that when the people want some degree of change we should be responsive to it, we should address it.

“Compromises have to be made, there’s no question about that. The report itself is not final. It still has to go through the litmus test of compromises. The ideas of people from different parts of the country will be different up to the extent they want to go with the proposals in the document, but it is necessary. It is vital that it is in fact, mandatory in the interest of the survival of our nation, that these issues be addressed. We cannot continue to allow the subject to become something that threatens our nation at any turn.

“Look at what is happening. Well, it is recommended there should be State Police. Today, we are having all sorts of organizations cropping out with all sorts of names.”

Earlier in his contribution and in response to the burning issue of agitation for power devolution, Kebbi state governor and Chairman of the Progressive Governors Forum, Abubakar Atiku Bagudu, expressed the hope that the ongoing Constitution amendment by the National Assembly would be an avenue to redress the imbalances in the federation.

“The party is not shy to acknowledge that our Constitution is not perfect and again under John Oyegun, the El-Rufai  Committee on True Federalism was created to look at those issues that  we should do better about.

“APC believes, let us amend Constitution because society is dynamic not because somebody has been wronged and cheated. If that is the basis for correction, then the agitation will never stop but if it’s based on let us make it better, I believe the proposal which have been submitted to the National Assembly will help to produce an  amended Constitution that will meet most of the aspirations.”

Former Lagos State governor, Bola Tinubu represented by former National Legal Adviser of the party, Babatunde Ogala, (SAN) while appraising the present administration claimed that the achievements of the  President Muhammadu Buhari administration have been underreported. He further claimed   that last week interview with Arise  TV has  since changed the narrative.

He recalled that the exit of incumbent Edo State governor, Godwin Obaseki.

from the party and his victory on the platform of the People’s Democratic Party was a  collateral damage for the APC.

Director General of the PGF and author of the book, Salihu Lukman  said that “the objective of the book is to contribute perspectives to APC leaders and members on challenges facing the party, government and the nation. As much as possible, effort is made to objectively analyse challenges and recommend responses.”