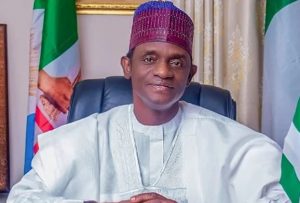 Governors elected on the platform of the All Progressives Congress have thrown their weight behind the Governor Mai Mala Buni-led Caretaker/ Extraordinary National Convention Planning Committee.

The decision was taken after a review of excerpts of the Supreme Court judgment which they noted did not invalidate Buni’s position as chairman of the committee.

This was contained in a statement titled, ‘Supreme Court Judgment on Ondo State Election,’ signed by the Chairman of the Progressives Governors Forum, Abubakar Bagudu, in Abuja, on Thursday.

He said the written judgment which was released late on Wednesday, August 4, 2021 had vindicated the party.

“We thank the Supreme Court for this landmark judgment, which among others, have dealt conclusively with the legality of the APC Caretaker and Extraordinary Convention Planning Committee, its composition and all its decisions.”

On the congresses, the governors said, “Most recently, reports of the July 31, 2021, Ward Congresses from all parts of the country have demonstrated once more the commitment of party leaders and members at all levels to the process of rebuilding the APC.

“The congresses were highly successful. We appeal to all members and supporters at all levels to remain resolute and continue to support all initiatives of the APC Caretaker Committee under the leadership of Governor Mai Mala Buni.

Earlier, a member of the caretaker committee, Mamman Tahir (SAN), while reading out excerpts of the judgement to newsmen at a press conference said, “The Supreme Court upheld the finding of the Court of Appeal that the Caretaker/Extraordinary National Convention Planning Committee, ‘was set up to act on behalf of the National Executive Committee to temporarily carry out the function of the National Working Committee until new members were democratically elected.

“The Supreme Court upheld further the ruling of the Court of Appeal that ‘it is evident that the said Governor Mai Mala Buni was appointed only in an acting capacity on a temporary basis to temporarily carry out and fill in the seat of the National Chairman of the party pending the elections of new members.”

“On the strength of all the above positions of the Supreme Court in the instant case and other earlier decided cases cited in support, it is our opinion that the Caretaker and Extraordinary Convention Planning Committee headed by Governor Mai Mala Buni is on firm ground to proceed with its mandate as given by the National Executive Committee of the APC.”