The Super Falcons were held to a 2-2 draw by Canada in an early kick-off friendly match on Tuesday.

Super Falcons were looking to avenge their  0-2  defeat to their Canadian counterparts last week Friday in the two-game encounter between both sides. 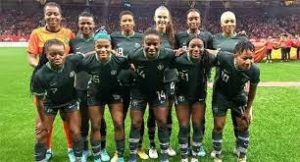 IfeomaOnumonu and RasheedatAjibade filled in for a missing AsisatOshoala as they locked horns with the sixth-ranked country in the world at the Starlight Stadium, Langford.

Eleven-time African champions were able to rattle the Canadians in the 8th-minute of the first half when a free-kick was converted by NJ/NY Gotham FC striker, IfeomaOnumonu to give them the lead.

Goalkeeper, ChiamakaNnadozie was called on several occasions to keep the Olympic champions at bay with increased pressure from the home team.

The first half ended with the Super Falcons in a  lone goal lead over the Canadian side.

Randy Waldrum side resumed the second half with the same intensity as the first and almost extended their lead in the 46th- minute from club Tigres UANL forward, UchennaKanu, who unleashed a powerful shot from outside the box that was parried by the Canadian shot-stopper, Sheridan.

However, an error from goalkeeper, Nnadozieand and captain OnomeEbi gifted the Canadian side their 48th -minute equaliser.

RashidatAjibade was able to restore the side’s advantage with a cross that beat everyone in the near box.

A wave of pressure from Canada finally yielded fruit with an 88th-minute header from ShelinaZadorsky stealing victory from the Falcons to leave the score deadlocked.

The two games against Canada were a huge test for the Super Falcons as they continued to prepare for the 2022 Africa Women Cup of Nations tournament to hold in Morocco.