After individual attempts to address the menace of open grazing in Southern states, the Forum of Southern Governors in one voice, yesterday, announced a ban on open grazing in all the 17 Southern states. They recommended that the Federal Government should support willing states to develop alternative and modern livestock management systems.

They also called on President Muhammadu Buhari, to as a matter of urgency and importance, address Nigerians on the frightening state of insecurity across the nation and convoke a national dialogue. 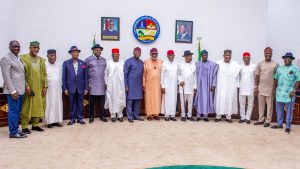 The governors, who were united by their resolve to make Nigeria work, did not betray partisan sentiments, but agreed among other issues that the President address Nigerians to restore the people’s confidence.

In a resolution after the meeting, the forum explained rationale for the ban on open grazing, stressing that, “development and population growth has put pressure on available land and increased the prospects of conflict between migrating herders and local populations in the South. Given this scenario, it becomes imperative to enforce the ban on open grazing in the South, including cattle movement to the South by foot.”

It was learnt that the governors collectively identified the incursion of armed herders, criminals and bandits into the Southern part of the country as being at the root of the “severe security challenge such that citizens are not able to live their normal lives in the region.

In a 12-point communiqué read by the Forum’s Chairman, Oluwarotimi Akeredolu, at the end of its four hours meeting, the Southern Governors expressed displeasure with the worsening state of insecurity and noted that the situation revolves around agitations over restructuring, but affirmed that the peoples of Southern Nigeria remain committed to the unity of Nigeria.

The governors stressed that the unity of the country should be “on the basis of justice, fairness, equity and oneness and peaceful co-existence between and among its peoples with a focus on the attainment of shared goals for economic development and prosperity.

“The progress of the nation requires that urgent and bold steps be taken to restructure the Nigerian federation to berth evolution of state police, review of revenue allocation formula in favour of the sub-national governments and creation of other institutions, which legitimately advance commitment to and practice of true federalism.

“The FG should convoke a national dialogue as a matter of urgency, based on the widespread agitations among various peoples for greater inclusiveness in existing governance arrangements.

“The meeting noted that in deference to the sensitivities of our various peoples, there is need to review appointments into Federal Government agencies, including security agencies to “reflect federal character as Nigeria’s overall population is heterogeneous.”

While the governors resolved to foster cooperation among the Southern states and the nation at large, they expressed concern over the continued gridlock on the Oshodi-Apapa Expressway, particularly the “chokehold it has exerted on the nation’s economy being the sole outlet from Apapa Wharf.

“The meeting, therefore, recommended the activation and establishment of ports in other states of the federation to create new jobs and promote socio-economic activities in the country.”

Rising from its third emergency security meeting in two weeks, President Buhari has approved new security measures specifically targeted at the Southeast and the South-South geo-political regions. But the meeting yesterday resolved not to make public the measures to be deployed to tackle insecurity in the country henceforth so as to ensure a more effective result, vowing to reverse the trend that has festered in the last one month.

The Acting Inspector General of Police, Usman Baba, made the disclosure to newsmen along with the National Security Adviser (NSA), Major General Babagana Monguno (retd), and Chief of Defence Staff, Gen. Lucky Irabor. There was no comment on security measures for the north, especially with rising tension in the Federal Capital Territory, Abuja, over activities of Boko Haram and bandits in neighbouring states.

At the end of the meeting, which held thrice in the last 11 days, the IGP said: “We have some measures that have been approved by the Council and we will see how we can change the narrative within the quickest possible means to restore law and order in that area. I may not go into the details of how we will do that.”

The NSA said: “The first two meetings were inconclusive, but today’s meeting is the final in the three meetings. The Nigeria Communication Commission (NCC) has been given certain instructions on how to support security agents. The Council agreed that the level of insecurity in the country, especially in the last one month, is something that has to be addressed with the immediacy that it requires and at the operational level, of course, the Chief of Defence Staff has been working with the service chiefs and the recommendations they have made to the Council are already being handled.”

Acting national leader of the pan-Yoruba socio-political organisation, Afenifere, Pa Ayo Adebanjo, has said President Buhari should resign owing to the issues facing the country. According to him, the President should take the exit door for the sake of self-respect, stressing that law and order has broken down in the country.

Adebanjo made this known yesterday during the dedication of the Reuben Fasoranti Chapel at Anglican Grammar School, Iju/Ita-Ogbolu to commemorate the 95th birthday of Pa Fasoranti. The chapel was constructed by the old students of Anglican Grammar School, Iju/Ita-Ogbolu, Ondo, to honour the revered Afenifere leader who was the pioneer Principal of the school.

Pa Adebanjo, while speaking at the event, said: “In a better and civilized country he (President Buhari) should have gone long ago. If he has self-respect, he should have gone because everything has fallen. What is he presiding over? Is it over corruption, security, or education? Law and order has broken down in the country for the past three years. It is only because Nigerians are over tolerant, that is why he is still there.”

THE National Chairman of the Peoples Democratic Party (PDP), Uche Secondus, said Nigeria is in serious trouble and in need of prayer by all citizens in view of the widespread insecurity. The opposition leader made this known in his Eid-el-Fitri message, urging citizens to reflect on the situation and pray especially for genuine leadership to save the country.

“The country is in serious trouble because of the glaring absence of leadership at a time it is most needed”, he stated.

Secondus, while congratulating Muslims as they end the Ramadan fasting period, said the nation’s democracy “more than ever before since 1999, is under a heavy stress that needs all hands to be on deck for its survival.”

He said six years after the All Progressives Congress (APC) assumed power, indicators are apparent that it is under such pressure that needs prayers and commitment of Nigerians for survival.

“Most of the problems confronting the ordinary people would have been solved if leaders absorb the lessons of Ramadan and allow it to influence their conduct in and out of office. The only way the last 30 days of fasting and prayer will be meaningful in our lives as a nation is if we allow the solemnness of the period to influence our thoughts and actions in relating with one another,” Secondus added.

Secondus also appealed to Nigerians of all faith to continue to maintain their inter-faith relations for the attainment of the desired peace in the country.

Meanwhile, the Minister of Niger Delta Affairs, Senator Godswill Akpabio, has told the Ambassador of the United States of America to Nigeria that it is in the interest of the global community for Nigeria to remain peaceful to avoid multiple negative effects that will affect the socio-economic wellbeing and structure of other countries.

Akpabio, who stated this yesterday in Abuja when he received, in audience, the U.S. Ambassador, Marybeth Leonard, warned that the whole of West Africa will not accommodate refugees from Nigeria if the current challenges result to a civil war.

According to the former Akwa Ibom Governor, it is in the interest of the Southeast to stop calls for secession, insisting that Nigeria must continue as a nation no matter the grievances.