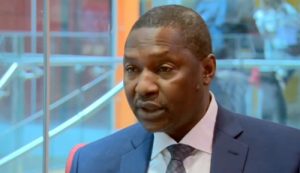 “Every person shall be entitled to freedom of expression, including freedom to hold opinions and to receive and impart ideas and information without interference” –Section 39 (1) CFRN. Davidson Iriekpen, Nseobong Okon-Ekong, Gboyega Akinsanmi in Lagos, Chuks Okocha, Alex Enumah, Adedayo Akinwale, Udora Orizu in Abuja and George Okoh in Makurdi.

The federal government has continued to face searing criticisms of its decision to suspend the operation of the American microblogging social network, Twitter, in Nigeria as some Senior Advocates of Nigeria (SANs) yesterday told THISDAY that the action contravened Section 39 (1) of the 1999 Constitution as altered.

They also dismissed the directive of the Attorney-General of the Federation and Minister of Justice, Mr. Abubakar Malami, to the Federal Director of Public Prosecution, to arrest and prosecute any user of Twitter in defiance of the suspension order, as offensive to Section 36 (12) of the Constitution as altered.

Section 39 (1) stipulates: “Every person shall be entitled to freedom of expression, including the freedom to hold opinions and to receive and impart ideas and information without interference.”

The senior lawyers argued that the suspension amounted to a hindrance of the citizens’ right to receive information.

They further argued that the threat of prosecution by the AGF has no basis in law as it clearly violates Section 36 (12), which states: “Subject as otherwise provided by this Constitution, a person shall not be convicted of a criminal offence unless that the offence is defined and the penalty, therefore, is prescribed in a written law, and in this subsection, a written law refers to an Act of the National Assembly or a law of a state, any subsidiary legislation or instrument under the provisions of law.”

Malami, had in a statement by his media aide, Dr. Umar Gwandu, had directed the Director of Public Prosecution of the Federation to work with the Ministry of Communication and Digital Economy to ensure speedy prosecution of alleged violators.

But Benue State Governor, Dr. Samuel Ortom, also described the suspension of Twitter as an ill-advised diversion from the core issues of insecurity and injustice plaguing the nation.

Joining the fray, the Peoples Democratic Party (PDP) caucus in the House of Representatives threatened to sue the federal government over the suspension of Twitter operations.

The lawyers, in separate interviews with THISDAY yesterday, described the action of the government as illegal, null and void and unenforceable.

They said the suspension in the first place was illegal because it infringed on the fundamental human rights of the citizens.

The lawyers, citing portions of the law, stated that the government cannot prosecute anyone under a non-existent law.

Human Rights activists and Senior Advocate of Nigeria (SAN), Chief Mike Ozekhome, citing decisions from the Court of Appeal and the Supreme Court, said: “No citizen of Nigeria can be tried or punished for an alleged offence not created by law.”

Ozekhome, who faulted the directive of Malami, warned that the government should “be ready to build thousands of prisons across all the nooks and crannies of Nigeria so as to accommodate the deluge of ‘erring’ Nigerians.”

According to him, there must be a statutory provision creating an offence before any person can be convicted for the said offence.

He said: “The punishment too must be specifically named in a legislation. The apex court emphatically stated that it is rudimentary and elementary for anybody or persons having something to do with dispensation of justice in this country to know that no citizen can be made to face any criminal trial for an act that is not qualified as an offence not defined or stated (codified) in any law and the punishment thereof prescribed.

“All the above judicial authorities are crystal clear that neither Malami nor the DPP, nor this government, can prosecute any Twitter user. Using Twitter is not a known crime or written offence.”

While noting that the National Assembly has not enacted any law banning the use of social media, including Twitter, Ozekhome said the mere verbal pronouncement, declaration, directives or threats by Malami could not amount to a law validly passed by the National Assembly.

Chief Godwin Obla (SAN) described the suspension of Twitter as senseless and not legally justiciable because there is no order proscribing Twitter in Nigeria.

Obla, who noted that what the federal government did in the first place was to stop telecommunication companies from allowing Twitter to use their platform to operate in Nigeria, said that no Nigerian could be punished for merely using Twitter which according to him is an online means of disseminating information.

He said: “There is nowhere and I have not seen the order by the Attorney-General proscribing Twitter because there must be an order. Can the federal government on its own have breached the citizens’ right to disseminate and to hold and manage information? The answer is no.

“The ban does not make sense. It is not legally justiciable. I do not see how it can be enforced, and I don’t see how any citizen can be found guilty of such an offence.”

Similarly, Prof. Konyinsola Ajayi (SAN), wondered when a pronouncement by a mi

nister becomes a law on which citizens could be prosecuted.

He said for anyone to be arrested and arraigned before a court of law, there must be an offence, adding that in this instance, there is no known law for which a person has disobeyed.

“I don’t know of any law that says if there is a pronouncement by a minister, it becomes an offence,” he said, explaining: “To arrest someone there must be an offence, a written offence. There must be a law; you must refer to a law that says anybody that disobeys an order or a statement by the minister is an offence but there is nothing like that, there is definitely no law like that.”

Another senior lawyer, Chief Tayo Oyetibo (SAN), also stated that there is no known law on which Nigerians could be prosecuted for using Twitter and added that the power to make criminal laws rests with the National Assembly and not the president.

“Criminal laws are not enacted in secrecy; it has to be published before it can be effective.”

In his contribution, a former President of the Nigerian Bar Association, Chief Joseph Daudu (SAN), said, President Muhammadu Buhari lacked the power to use state institutions to fight personal battles.

Daudu also clarified that the decision of Twitter to suspend Buhari’s personal account “is not a matter between Nigeria and the social networking service.”

He made this clarification in his response to THISDAY’s inquiries on the constitutionality of the federal government’s decision to suspend Twitter’s operation in Nigeria.

Daudu said every Nigerian operating a Twitter account “does so in his own name, even if the underlying objective is to promote the objectives and aspirations of his constituency, business outfit or even office.”

He, therefore, said Buhari, though a very eminent personality “is an individual customer of Twitter with no greater rights than the other millions of persons who have also subscribed to Twitter and agreed to their rules and conditions of membership.”

“Twitter perceived that Buhari broke its rules and applying one of the sanctions open to it removed the offending tweet. Whether the account was blocked or suspended is really not the issue at this point in time,” he added.

He, therefore, said the president lacked the power to use state apparatus and institutions “to hit or get back at Twitter, which is what he has done in retaliation by banning them from Nigeria using state institutions such as the NBC and the NCC to deprive all Nigerians of their access to Twitter.”

Mr. Dayo Akinlaja (SAN) also stated that before anyone could be punished for any offence in Nigeria, the offence must be defined and the punishment thereof must be prescribed in a written law.

“This is what is stipulated by Section 36(12) of the Constitution of the Federal Republic of Nigeria,” he said.

He added that except there is an existing law that proscribes the usage of the Twitter account, “it is unconstitutional to arrest let alone prosecute anyone for using Twitter’s services in Nigeria.”

House of Representatives spokesman, Hon. Benjamin Kalu, also told THISDAY that the parliament is currently looking into the recent suspension of Twitter by the federal government, with a view of getting a critical analysis before taking a position on the trending issue.

Kalu said: ”The House is busy looking into the trending Twitter issue as expected for any federal parliament. It is time for an in-depth critical analysis of the entire picture not yet time for press releases on the issue. But be rest assured, it won’t be long before we make our position known in line with our laws and democratic principles.”

Human rights lawyer and former National Secretary of the Labour Party, Dr. Kayode Ajulo, condemned the attempt to prosecute violators of the suspension of Twitter in Nigeria.

Ajulo opposed Malami’s position, saying: “Without prejudice to the rationale for the ban of the blogging site in Nigeria, it is imperative to note that the provisions of Section 36 (12) of the 1999 Constitution are clear to the effect no one shall be prosecuted for an offence not known to law.

“I have carefully stated the contents of our various penal laws and nowhere is a citizen of the country prohibited from receiving or disseminating information, which is a right guaranteed under Section 39 of the Constitution.”

Ortom described the suspension of Twitter operations in the country as an ill-advised diversion from the core issues of insecurity and injustice plaguing the nation.

The governor said the Twitter suspension offered no solution to any of the problems facing the country, as the move was only capable of heightening tensions and fuelling suspicions among Nigerians over the real motives of the federal government.

Ortom, in a statement by his Press Secretary, Mr. Terver Akase, said that suspending Twitter amounted to suppressing freedom of expression, gagging social media and undermining fundamental human rights of Nigerians, a development contravening Chapter four of the 1999 Constitution as altered.

Ortom emphasised the need for the federal government to listen to the views and yearnings of the people to enable it to address the challenges confronting the nation.

Meanwhile, the PDP caucus in the House of Representatives has threatened to sue the federal government in court over the suspension of Twitter operations in the country.

It described the decision as an act of desperation of a non-performing and failed government to intimidate and cow the citizens to consolidate its hold on power by brute force.

The Leader of the caucus, Hon. Kingsley Chinda, in a statement yesterday, said Twitter had become an integral component of the citizens’ ability to keep the government in check and to provide real-time feedback on the impact of the government’s activities on the citizenry.

The PDP has accused the National Caucus of the All Progressives Congress (APC) of being behind the suspension of Twitter in Nigeria.

The PDP said facts available to it showed how APC leaders at one of their party’s national caucus meetings recommended the regulation of social media in Nigeria and how they have been plotting to obliterate internet-based interaction platforms such as Twitter.

The PDP in a statement by the National Publicity Secretary, Mr. Kola Ologbondiyan, said the APC Caucus had been pushing bills in the National Assembly, particularly in November 2020, seeking to enforce a draconian regulation of social media so as to gag Nigerians from exposing its atrocities, including human right abuses, treasury looting, nepotism and sectional marginalisation by the APC administration.

The PDP said: “Nigerians can also recall how the APC administration in carrying out the agenda of its party has been using the Minister of Information and Culture, Alhaji Lai Mohammed, to suffocate the media space with humongous fines and threats of suspension of operating licences of broadcast stations.”