Rush in voter registration in Nigeria 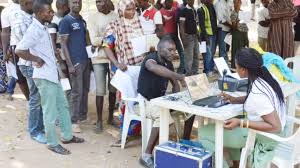 The Independent National Electoral Commission (INEC) has reported an unprecedented increase in the number of Nigerian youth who are coming forward to be registered to vote in the upcoming general elections.

With the outcome of recent primary elections in the country, Nigerians have shown renewed interest in registering, collecting and /or transferring their Permanent Voter Cards (PVCs) ahead of next year’s general election.

However, there are efforts by individuals to ensure massive registration and collection of PVCs ahead of the polls.

Some youths say they have decided to put things right by registering to exercise their civil rights.

“Gone are those days we said let them go and vote and we sit at home but now we need to come out and do the right thing for the country to be good, not minding the weather which is not comfortable,” said Mary, a student.

“I have to put up my effort to register to vote because we are tired and we want the betterment of our country. We are tired of the corruption, the subsidy, the power everything, we are feed-up and want something better,” said a university student, Ogogu Racheal.

Onyeka Nwaizu, a civil servant says he believes the factor that motivated the surge is a result of a new movement in the country.

“What we have passed through this period has opened people’s eyes, This PVC is our power and this time around, we are taking what belongs to us; that is why you can see this crowd trying to get their PVC,” he added.