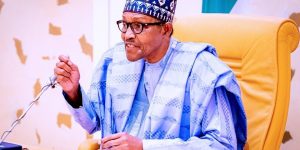 President Muhammadu Buhari has called on members of the governing All Progressives Congress (APC) to remain united and strong and also support the incoming leadership of the party ahead of the forthcoming 2023 General elections in the country.This is just as the President of the Senate, Dr Ahmad Lawan, said President Buhari will remain the compass of APC even after leaving office by May, 2023.

Speaking at the Eagle Square, Abuja, venue of the extra ordinary National Convention of the party on Saturday night the, the President said the Convention was coming at a crucial time when there is need to prepare for another round of a general election. He said: “Therefore, the need to remain strong and united for the Party to exploit the rich and abundant potentials at its disposal cannot be overemphasized. We appreciate the right to hold different opinions and aspirations, however, such differences must not be to the detriment of the Party.

Earlier in his remarks at the convention, President of the Senate, Dr Ahmad Lawan, declared that President Buhari will continue to provide leadership to the All Progressives Congress (APC) beyond 2023 after his exit from office.

According to him, President Buhari’s ability to sustain unity within the party against all odds, positions him favorably as the “compass” needed to give direction to the party at all times.