The Senate has summoned Minister of Youth and Sports Development, Sunday Dare over the destruction of Moshood Abiola National Stadium, Abuja by hoodlums after the Super Eagles failed to qualify for the Qatar 2022 World Cup. 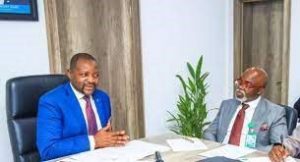 The upper chamber equally invited the President of the Nigeria Football Federation (NFF), Amaju Pinnick and other agencies involved in the maintenance of stadium.

The resolutions were sequel to a Point of Order raised by Sen. Michael Nnachi (PDP-Ebonyi) during Wednesday’s plenary.

The Senate also mandated its Committee on Sports and Youth Development to investigate the remote and immediate causes of the failure of the Eagles to qualify for the World Cup in spite of the numerous government support.

“Violent reaction by irate fans reportedly took place in the aftermath of the Nigeria vs Ghana qualifier leading to vandalization of facilities at the stadium and the unfortunate death of Zambian CAF official, Joseph Kabungo.

“The national stadium was jam-packed with highly expectant Nigerian fans throughout the controversial match and the alleged violent reaction of those fans to the outcome of this match has become a subject of local and international media criticism.

“A lot of valuable facilities at the stadium were destroyed but the extent of destruction is yet to be determined by the relevant government authority.

“There is no gainsaying that the destruction will cause the government of Nigeria several millions of naira to either replace or effect repairs.

“Apart from several unidentified football fans who were injured as a result of this incident, the death of Dr Joseph is a huge loss to the global football community.”

Supporting the motion, Sen. Abba Moro (PDP-Benue) said it was a very sad day for Nigeria.

“It is sad that Nigerians vented their anger and frustration on the physical stadium.

“There is an urgent need for this Senate, if possible, to intervene to see that our stadia across Nigeria are properly structured and made in such a way that future occurrence or fans invading the pitch or destroying the stadium will be prevented,” he said.